The punters are rallying for the undefeated mare Marabi to continue her winning ways as the dominant odds-on favourite in 2022 William Reid Stakes betting this Friday night at The Valley. 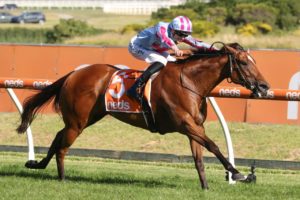 Undefeated mare Marabi is odds-on to take out the 2022 William Reid Stakes at The Valley on Friday night. Photo: Ultimate Racing Photos.

Night racing at Moonee Valley is headlined by the Group 1 $1 million William Reid Stakes (1200m), which has attracted a capacity field of sprinters this autumn.

The five-year-old daughter of I Am Invincible ticked the Group 1 box last time out when backing-up from her emphatic win in the Group 2 Australia Stakes (1200m) to defeat Away Game a half-length in Caulfield’s Oakleigh Plate over 1100m on Blue Diamond Day.

With a month between runs she’s been kept fresh and will be ready to fire returning to six furlongs at The Valley where she boasts a perfect three-from-three record at the track.

Marabi is at a short quote of $1.70 in the latest William Reid Stakes odds online at Ladbrokes.com.au, the same quote Sunline won at back in 2019.

The flying Maher/Eustace stable will have three runners in the William Reid Stakes field with the favourite joined in the line-up by the in-form pair Generation ($16) and Marine One ($26) drawn opposite ends in gates two and 13 respectively.

Consistent Snitzel colt Generation is out to be the sixth three-year-old since 2003 to win the William Reid and presents fit third-up.

Dropping from 58.5kg to 56kg, he has Jamie Kah aboard for the ride where he’ll be looking to finish in the money behind his highly-spruiked stablemate.

Marine One has also been excellent of late having won two of his past three starts.

The Capitalist colt has also won at Moonee Valley previously and was last seen beating Oxley Road home in the Group 2 Rubiton Stakes (1100m) back on February 12.

Despite a full field, so dominant is Marabi in the markets that no other runner is at single-figures to stop her.

The “danger” occupying the second line of betting at $11 having been backed-in from opening odds of $18 is The Inferno drawn one inside the favourite.

Earning a start in Sydney’s $15 million The Everest, he only managed to run 10th to Nature Strip before being well-beaten again fresh behind Waller’s youngster Home Affairs in the Group 1 Black Caviar Lightning (1000m).

Getting up to 1200m in easier grade back at Moonee Valley suits and he could be the one to surprise Marabi should she not turn up in her best form.

Other notable runners in the mix include the rails-drawn Newmarket Handicap runner-up The Astrologist ($13), Kemalpasa ($16) last seen winning a Morphettville Black-Type in late January over Behemoth and the Chris Waller-trained September Run ($18) chasing her first win since the 2020 Coolmore Stud Stakes.

The 2022 William Reid Stakes is set to run as Moonee Valley Race 7 at 9:15pm (AEDT) with full markets courtesy of Ladbrokes.com.au available here.