The Lexus Hotham Stakes is a Group 3 staying event held on Victoria Derby Day offering a ballot exemption to the winner into the Melbourne Cup Field a few days later. 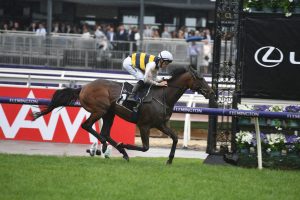 The Group 3 2019 Lexus Stakes – now known as the Hotham Stakes – is a 2500m staying event held at the illustrious Flemington Racecourse on Victoria Derby Day, the Saturday prior to the Melbourne Cup.

The Lexus Stakes winner gains a ballot exemption for the Group 1 $8 million Melbourne Cup (3200m) back at the track just three days later and Shocking (2009) was the last to complete the double.

There are a variety of paths that horses take to the Lexus Stakes. As it runs at the culmination of the spring carnival, those horses which target the Lexus Stakes may have been racing in Victoria, NSW or may even have just come out of quarantine following their trip to Australia. In the past, the Group 1 Caulfield Cup (2400m) has been a fairly popular lead-up event.

A number of horses use the Lexus Stakes as a lead up event to the Melbourne Cup, held just four days later on the first Tuesday of November. This has been a common course for international horses who are seeking ballot exemption, which the Lexus Stakes provides.

The Group 3 Queen Elizabeth Stakes (2600m) is another popular target following a Lexus Stakes run held the Saturday after on Mackinnon Stakes Day and offers a bonus to any horse that was balloted out of that year’s Melbourne Cup field should they salute.

The 2019 Lexus Stakes was held on Saturday November 2, 2019 as the Hotham Stakes and won by the Joseph O’Brien-trained Irish stayer Downdraft.

The Lexus Hotham Stakes 2019 Results saw the Joseph O’Brien-trained Irish raider Downdraft power home in a dominant 1.5 length victory to secure his spot in next Tuesday’s $8 million Melbourne Cup field. O’Brien won the race in 2017 with Rekindling and has four potential runners as he chases his second ‘Loving Trophy’ in three years.

Read more on the impressive Hotham Stakes 2019 win by the Melbourne Cup-bound Downdraft.

The latest Lexus Stakes 2019 odds provided by Ladbrokes.com.au will be listed below on the stayers and potential Melbourne Cup horses.

The Lexus Stakes field attracts a quality line-up of spring stayers, the majority of which are chasing the Melbourne Cup ballot exemption on offer to the winner of the Victoria Derby Day race.

The official 2019 Lexus Stakes Final Field & Barriers are announced the Wednesday of race week and will be published in full below.

Update: There are now three official scratchings from the Lexus Stakes field with #2 Sound (11) and #5 Neufbosc (10) joining #9 Youngstar (5) as the withdrawn runners already assured of a start in Tuesday’s 24-horse Melbourne Cup field.

The Lexus Stakes was inaugurated in 1969 as the Hotham Handicap, it’s current registered name. One of the oldest races in Australia, the Lexus Stakes has a very prestigious history to match its age.

The Lexus Stakes is renowned for a very rare triple dead heat in 1956. Fighting Force, Ark Royal and Pandie Sun crossed together to win one of the only races ever to record three winners.

Besides its current name, the Lexus Stakes has been known by a variety of sponsor titles. For ten years prior to 2009 (when Lexus started sponsorship) it was known as the Saab Quality. Prior to that, it was the Lean Cuisine Quality, Ten News Quality, Crown Quality and The Dalgety.

Notable Lexus Stakes winners include Miss Carbine (1899), Spear Chief (1938), Foxzami (1949), Think Big (1974), Brew (2000) and Shocking (2009) who was the last Lexus Stakes winner to back-up and dominate that year’s Melbourne Cup results doing the double. Lexus Stakes results, winners and placegetters since 2000 are listed below, along with winning times.