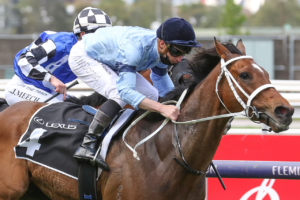 Four horses in this year’s Lexus Hotham Stakes field remained in the entries for the Group 1 $8 million Lexus Melbourne Cup (3200m) with Waller’s Newcastle Gold Cup winner Great House the only one inside the Top 24 on the order of entry.

A drifter on course at Flemington, the Galileo five-year-old jumped narrow second favourite and was too strong for his rivals making up ground late to run down the Ciaron Maher & David Eustace-trained Mankayan and hit the line well.

The Lexus Stakes results mean Great House is now a confirmed starter for Waller in the ‘race that stops a nation’ with the stable potentially saddling-up four Melbourne Cup horses.

“A very good ride from James.

“He’s been a nice sound horse and he’s been honest and every time we’ve raise the bar the seems to have stepped up to the plate so why not keep doing that.

“We’ll take him home and wrap him up in cotton wool and try and get him here in the best possible order on Tuesday.”

Also still in the mix are Ocean Billy, Sydney Cup winner Selino and nine-time Group 1 champion Verry Elleegant who Waller is yet to confirm as a runner.

It was the perfect start to Victoria Derby Day for Waller and jockey James McDonald who made it two-from-two after winning the first with a bullish three-length victory in the Group 3 Carbine Club Stakes from filly Fangirl.

McDonald gave Great House a patient and perfectly-timed ride, happy to settle third last in the run as Knights Order dictated a solid tempo in the lead.

With 1200m to go they really picked up the pace ensuring a genuine staying test ahead of the world’s richest two-mile handicap in three days’ time.

At the 700m Mankayan, after getting a lovely run third tucked away on the fence, moved up into second as Fun Fact lost ground.

Into the straight at the 400m Knights Order was grabbed by Manakyan as jockey Linda Meech looked to steal the show and secure her mount the eleventh-hour Melbourne Cup exemption.

McDonald however began his run in earnest on Great House with 300m to go, the galloper giving strong chase.

It took the favourite the entire length of the Flemington straight but in the end Great House wore down the gallant runner-up for a three-quarter length victory in a time of 2 minutes 34.56 seconds.

In third was the Michael Moroney-trained Emissary who, along with Mankayan, remains 26th on the Melbourne Cup order of entry and sweating on the attrition rate to gain a start.

Maher & Eustace may have lost the Lexus, but they will now be represented by in-form import Floating Artist who was 25th on the ballot but moves up with the news Bjorn Baker would not be accepting with Fun Fact.

Fun Fact dropped right out to run a distant last with things going amiss for the grey who – at 22nd on the Melbourne Cup order of entry.

Melbourne Cup final acceptances close at 4:30pm (AEDT) and will be announced along with the barrier draw late this afternoon.

Great House is at $26 in all-in Melbourne Cup betting to complete the Lexus Stakes – Melbourne Cup double for the first time since Shocking (2009).