2021 Chelmsford Stakes Results: Think It Over Wins In Photo Finish

Kerry Parker’s George Ryder winner Think It Over was excellent at Royal Randwick becoming a dual weight-for-age winner with his narrow final-stride victory in the 2021 Chelmsford Stakes. 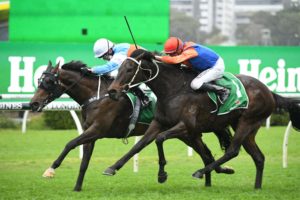 Think It Over lunged right on the line to win the 2021 Chelmsford Stakes at Randwick. Photo: Steve Hart.

The So You Think six-year-old was well-supported in betting on the day and got the job done right on the line to take out the Group 2 $250,000 Chelmsford Stakes (1600m) over a mile second-up.

Following on from his first-up sixth when under a length beaten fresh in the Group 1 Winx Stakes (1400m) a fortnight back, Think It Over was given a well-executed ride in the Chelmsford by jockey Nash Rawiller.

It was the Gai Waterhouse & Adrian Bott-trained 40/1 roughie Riodini who was best out the barriers with the blinkers on racing straight to the lead.

Think It Over meanwhile was racing around in fourth the early stages settled well and poised for a big run late.

Riodini was out to a big lead mid-race, was two clear at the 600m and still in front turning for home.

At the 300m Think It Over knuckled down and began to chase down the brave leader, making a lunge right on the line to force a photo finish.

In a really close photo, top honours went to Think It Over who took forever to pick up Riodini but got there right on the post.

“It was a really tough win there,” Parker told Sky Thoroughbred Central post-race.

“Credit to the inside horse, he just kept kicking.

“I thought when we popped out 300 to go, I was pretty confident he’d run over the top of him, but it went down to the dot.”

Running a gap back third in a nice effort was the mare Montefilia in her four-year-old debut rounding out the Chelmsford Stakes trifecta.

Having showed a terrific will to win to get home first, Think It Over is likely to head next-up into the Group 1 $1 million George Main Stakes (1600m) back at the track on September 18.

“I think that’s where you can work out the rest of your preparation from there,” Parker said of the George Main.

“There will be a few more good ones in that.

“He’s got to keep stepping up, but it’s always good to get one under the belt early in the prep.”

All going well and a trip to Melbourne is also on the cards with a run in the Group 1 $5 million Ladbrokes Cox Plate (2040m) at Moonee Valley on October 23 calling.

Think It Over is into $9 in the all-in 2021 George Main Stakes betting markets at Ladbrokes.com.au – available in full here – out to be the first horse to do the Chelmsford – George Main double since Winx (2017).

Futures 2021 Cox Plate odds online are led by Annabel Neasham’s outstanding first-up Tramway Stakes winner Zaaki ($3), while Think It Over is listed at $34.