A quality field of weight-for-age stars do battle in Sydney’s 2021 Chelmsford Stakes field this weekend with markets led by the autumn’s Doncaster Mile champion Cascadian. 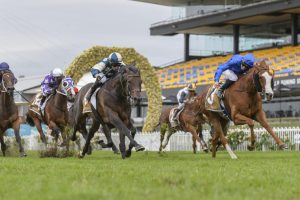 Sitting top of the Chelmsford Stakes odds at Ladbrokes.com.au is the James Cummings-trained Cascadian for Godolphin drawn well in gate three with Hugh Bowman to ride.

Bowman chases his fifth Chelmsford Stakes victory and retains the ride on the seven-year-old favourite following a first-up fifth when only a half-length beaten and making up lots of ground after being hampered near the 300m in the Group 1 Winx Stakes (1400m) a fortnight back.

Fitter for that first-up performance and better suited to the 1600m, Cascadian returns to the track and distance of his Group 1 Doncaster Mile (1600m) success from April.

He’s firm $3.60 favourite in Chelmsford Stakes betting at Ladbrokes.com.au and is one of five out of the 14 final acceptors under double-figures to win.

The second favourite and noted danger at current Chelmsford Stakes odds of $4.50 is the Kerry Parker-trained Think It Over out wider in gate 10 with last year’s winning hoop Nash Rawiller in the saddle.

Also second-up out of the Winx Stakes, this So You Think six-year-old was sixth in the tight finish of that Group 1 from August 21 and also looks well suited to further.

He is yet to win over the mile but has four placings from five 1600m runs (5:-0-3-1) and is after his first victory since the Group 1 George Ryder Stakes (1500m) at Rosehill over Dreamforce in late March.

Think It Over was slow out in the Winx Stakes and, if away better second-up, is another improver with genuine winning claims.

Drawn the rails in barrier one is the Bjorn Baker-trained She’s Ideel, a $7 shot to go two better than her surprise Winx Stakes third fresh at 40/1.

An ultra-consistent Dundeel mare, this five-year-old has an excellent record at Randwick (7:3-1-2) and over the distance (3:-2-1-0) but is a perennial placegetter.

She hasn’t won since October last year but has since racked up seven top three runs including her Group 1 Tancred Stakes (2400m) second to Sir Dragonet in April.

She’s Ideel was also fourth in the Sydney Cup over two miles at the end of her latest campaign and, having run so well over the 1400m, will be improving getting out over a mile second-up from that inside alley on Saturday.

Baker is after a second win in the event following his 2019 victory with Samadoubt.

Rounding out the single-figure fancies are then Chris Waller’s market mover Shared Ambition ($15 into $8) and his widely-drawn stablemate Kukeracha ($8) jumping from the outside alley (14).

Kerrin McEvoy rides the returning Shared Ambition first-up on the weekend, the Born To Sea gelding last seen running a distant eighth behind seven-length winner Zaaki in Brisbane’s Group 1 Doomben Cup (2000m) and out to atone for a ninth in last year’s Chelmsford Stakes results.

Progressive Night Of Thunder four-year-old Kukeracha meanwhile was excellent in Brisbane over the winter running third in the Group 2 Queensland Guineas and second in the Group 3 Rough Habit before his narrow Group 1 Queensland Derby (2400m) triumph in late May.

He resumed at Hawkesbury on August 19 when only a quarter-length second to Berdibek in the Listed Rowley Mile (1600m) and presents as a chance here over the same distance at Randwick.

Waller also saddles-up Dashing Willoughby ($31), Order Again ($19) and his Sydney Cup winner Selino ($101) as he looks to continue his outstanding strike-rate in the event.