The Adelaide Cup runs over the two miles (3200m) on a Monday in March attracting a host of top stayers each autumn. 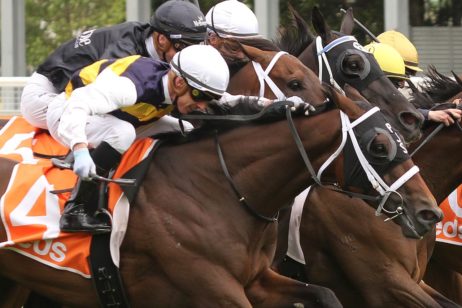 The Group 2 Adelaide Cup is an open handicap race held at Adelaide’s Morphettville Racecourse in early to mid-March each year during the Adelaide Autumn Racing Carnival.

Raced over 3200m, the Adelaide Cup is the same distance as the prestigious Melbourne Cup held on the first Tuesday of November each spring at Flemington Racecourse in Victoria. Back in 1992 the great grey Subzero completed the rare Adelaide Cup – Melbourne Cup double.

Run on a Monday afternoon each year on the Labour Day public holiday in SA, the always popular staying event offers $300,000 in prize money and attracts a host of local stayers as well as a few interstate horses chasing the lucrative prize money in the classic.

The latest Adelaide Cup winners to back-up out of the Roy Higgins were the Lindsay Park-trained mare Fanatic (2nd in 2018) and the Danny O’Brien-trained King Of Leogrance (2020) who did the double.

The 2022 Adelaide Cup ran on Monday March 14, 2022 and saw jockey Jamie Kah win her home-town Cup for the first time aboard the favourite Daqiansweet Junior ($4.20F).

Home-grown hero Ms Jamie Kah enjoyed an incredible day at Morphettville on Monday riding her fourth winner at the meet when celebrating her first Adelaide Cup success aboard the Phillip Stokes-trained favourite Daqiansweet Junior ($4.20F) in the two-mile classic.

The season’s latest Adelaide Cup 2022 odds and betting market links to Ladbrokes.com.au will be available below leading up to the 3200m feature so stay tuned.

Daqiansweet Junior ($4.20 in 2022) was the last favourite in Adelaide Cup betting to salute for the punters.

The Adelaide Cup field features an ever increasing quality of both local and visiting autumn stayers coming out of lead-up races including Flemington’s Roy Higgins Quality that produced the 2017 champ Annus Mirabilis (5th), 2018 winner Fanatic (2nd) and 2020 champ King Of Leogrance (1st); Tasmania’s Launceston Cup (2400m) the month before and the Lord Reims Stakes that is the key local lead-up.

The official Adelaide Cup 2022 final field and barriers are announced on Thursday March 10, 2022 and will be published in full below.

The 2022 Adelaide Cup field features a smart line-up of stayers led in betting by the Phillip Stokes-trained  Daqiansweet Junior and the 58kg top-weight Skelm who ran second and first respectively last time out in the Listed Torney Cup (2500m) at Moonee Valley.

Click here to read more on the key stayers in the Adelaide Cup 2022 field and betting markets.

Early nominations for the Adelaide Cup in 2022 close on Thursday March 3, 2022 with the full list of entries to be confirmed below.

Originally run in May, the Adelaide Cup was moved to March in 2005. The Morphettville Racecourse has been home to the Cup since 1876 and was previously held at the Old Course where it was first won by Falcon in 1864. Over the years the event has switched between being a two mile and one mile five furlong race, however in the years 1870-71 and 1886-88, the race was not held.

The Adelaide Cup is not used as a guide to the Melbourne Cup as the last Cup double winner was Subzero in 1992. In 2007 the event was downgraded from Group 1 status to Group 2, a decision made by the Australian Pattern Committee.

The 2019 Adelaide Cup winner Surprise Baby went on to run an eye-catching fifth under a length beaten by Vow And Declare in that spring’s Melbourne Cup results.