The bookies are tipping the Melbourne form to stack-up in South Australia on Monday with Daquiansweet Junior heading markets on the always-popular 2022 Adelaide Cup field at Morphettville Racecourse. 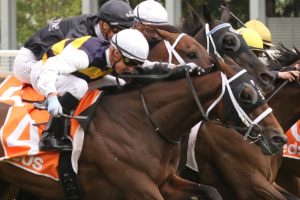 A quality line-up of sixteen stayers faces off in this season’s Group 2 $300,000 Adelaide Cup (3200m) over the two-miles and it is the locally-trained Daquiansweet Junior coming off a run in Victoria set to steal the show.

A progressive four-year-old son of Sweet Orange, the Kiwi-bred gelding is prepared by Phillip Stokes but the Adelaide Cup marks his first official start at his home track.

He comes off a string of good runs in Melbourne including a 2500m win in a Benchmark 100 at Moonee Valley in January and a last start second at the same track and distance behind Skelm in the Listed Torney Cup on February 18.

Top hoop Jamie Kah travels to continue associations on the $4.60 Adelaide Cup favourite through Ladbrokes.com.au in her hometown as Stokes chases back-to-back wins in the classic following his 2021 success with Good Idea.

A maiden Adelaide Cup victory for the now Melbourne-based super jockey Kah aboard the favourite will go a long way in confirmed Daquiansweet Junior for a bid in the Group 1 Sydney Cup (3200m) over the same distance in Sydney on April 9.

So You Think seven-year-old Good Idea also returns looking to be the first dual Adelaide Cup winner since Our Pompeii (1993-94).

The reigning champion is at Adelaide Cup odds of $17 to achieve the rare feat and atone for his seventh in the Listed Roy Higgins Quality (2600m) at Flemington last weekend.

He is proven at both the track and distance however and has been thereabouts of late so could prove potential value returning home.

The Zed six-year-old boasts winning form up to 2800m and was good on New Year’s Day at Flemington when defeating Skelm in the Listed Bagot Handicap over that distance.

He has had two subsequent runs, also at Flemington, ahead of his first look at Morphettville but does go up in weight and class for his two-mile test.

The Terry Kelly-trained Animal Kingdom seven-year-old is out to join eight-year-old Tanby (2015) as the only other Adelaide Cup winner older than six since Capecover (seven-year-old in 2010).

Rounding out the single-figure fancies at $8 is the flying Symon Wilde-trained Aurora’s Symphony out wide in gate 16 but with plenty of time for jockey Damien Oliver to overcome the alley.

The Glass Harmonium five-year-old hasn’t finished out of the top three in his past six starts and comes off back-to-back wins in the Colac Cup and Group 3 Launceston Cup (2400m).

The Adelaide Cup 2022 is set to run as Morphettville Race 7 at 4:15pm (ACDT) on Monday and full markets courtesy of Ladbrokes.com.au are available here.