The Group 1 JJ Atkins field of two-year-olds faces off in June on Stradbroke Handicap Day each Brisbane Winter Racing Carnival. 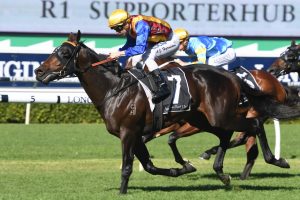 The JJ Atkins Plate, formerly called The TJ Smith, is the premier event for two-year-olds at the annual Brisbane Winter Racing Carnival. Traditionally held on the highly anticipated Stradbroke Handicap Day in June at Eagle Farm Racecourse, this Group 1 race is run over a middle distance of 1600m under set weight conditions. Worth $600,000 it is one of the most lucrative races conducted during the carnival and shares the day with a host of other Group status races including the Group 1 $1.5 million Stradbroke Handicap (1400m) and Group 1 Queensland Derby (2400m).

The 2017 JJ Atkins and other Stradbroke Handicap Day races were moved from Eagle Farm to Doomben Racecourse and Doomben hosted the 2018 JJ Atkins again due to the ongoing track upgrades at Eagle Farm.

Many J.J. Atkins winners and placegetters will continue on to bigger and better races later in their careers.

The 2019 JJ Atkins Plate ran on Saturday June 8, 2019 and was won by the Anthony Cummings-trained one-time favourite Prince Fawaz.

The official JJ Atkins Plate 2019 results saw progressive Fastnet Rock colt Prince Fawaz enjoy a narrow victory over the brave Chris Waller-trained Kubrick with just a neck separating the first two over the line. Waller also prepared the third placegetter Reloaded, while the stable’s race favourite Accession could only manage to run three lengths back sixth in the JJ Atkins finishing order for 2019.

The top JJ Atkins 2019 odds and Group 1 Brisbane racing odds provided by Ladbrokes.com.au will be available below as soon as released.

The two-year-olds in the JJ Atkins field traditionally come off a lead-up run in Brisbane earlier during the winter with the BRC Sires’ Produce Stakes the key preparatory run into the Group 1 mile feature. Interstate raiders also make-up a bulk of the JJ Atkins field each year and have a high strike rate beating home the local youngsters.

The official 2019 JJ Atkins Field & Barriers will be released by Racing Queensland the Wednesday leading-up to Stradbroke Handicap Day and published in full below.

The J.J. Atkins Plate 2019 Final Field is now out and the early favourites all came up trumps with favourable barrier draws including the Anthony Cummings-trained Prince Fawaz in gate four and Team Snowden’s BRC Sires’ Produce Stakes winner Strasbourg one wider in five.

First acceptances for the JJ Atkins 2019 are taken at the end of May and will be published below once released by Racing Queensland.

The official 2019 J.J. Atkins Plate First Acceptances have now been released with 23 juveniles left in the mix including the undefeated Kubrick for trainer Chris Waller whose potential contingent also includes the improving Accession leading the ballot and the well-fancied Reloaded.

The early JJ Atkins 2019 nominations close on a Tuesday in early May and will be available right here as soon as announced by Racing Queensland.

First run in 1897, the event was originally known as the Claret Stakes and Common won the inaugural race. The event was then named The TJ Smith after legendary trainer Tommy Smith. In 2013 the race was renamed the J.J. Atkins in honour of legendary Queensland trainer Jim Atkins.

The JJ Atkins began as a principal race run over six furlongs but was increased to seven furlongs in 1905. The race was not held between 1942 and 1945 but recommenced in 1946 under the same conditions. Nearly a decade later the race distance was increased to eight furlongs before changing to the metric conversion of 1600m in 1973. Not long after in 1980 the event reached Group 2 status before finally being elevated to its current Group 1 status in 1985.