The Graeme & Deborah Rogerson-trained Sydney raider, Sharp ‘N’ Smart, has firmed into clear favouritism to take out the 2022 J.J. Atkins over the Eagle Farm mile this weekend in Brisbane. 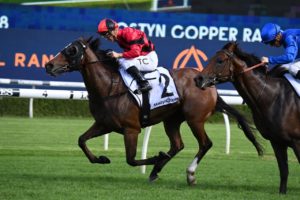 One of two elite level features on the Stradbroke Handicap Day card for Saturday, this season’s Group 1 $1 million J.J. Atkins (1600m) shapes up as a typically open affair.

Heading the two-year-old contenders in betting at a current quote of $4 through Ladbrokes.com.au, Redwood gelding Sharp ‘N’ Smart drew barrier 10 for jockey Hugh Bowman who chases his first winning ride in the event.

The Kiwi expat won two back over the mile in New Zealand at Listed level before his debut down under at the Eagle Farm track last Saturday.

He was good when narrowly beaten in a photo-finish with Political Debate in the Listed The Phoenix (1500m), a run he is sure to improve on now having had a taste for the track.

Sheeza Belter is out to be the first JJ Atkins winning filly since Linky Dink (2009).

The progressive daughter of Gold Standard boats a 50% winning strike rate after six starts to date, and was good at the track last start winning the Group 2 BRC Sires’ Produce Stakes (1400m).

Taking on the boys again with the same hoop and a similar gate, the classy chestnut chases the BRC Sires’ – JJ Atkins double last completed by Sizzling (2012).

The nicely-bred So You Think colt presents fit third up having just held on to break his maiden status here last weekend on the back of a third to Swiss Exile in the Group 2 Spirit Of Boom Classic (1200m) the run prior having made up plenty of late ground.

The other best in JJ Atkins betting this Brisbane Winter Racing Carnival are the Peter Moody-trained Brereton ($11) out in gate 15 for jockey Jamie Kah, and the also widely-drawn Owen County ($11) drawn 17.

Third-up on Saturday, he was last seen running third in the BRC Sires’ here, but will need luck from the barrier.

Also hoping to cross from wide and be competitive late, Owen County represents trainer John Sargent in the JJ Atkins and will be ridden by Keagan Latham.

The Dundeel gelding has won two of his three runs ahead of this notable class rise, including a last-start 1400m success at Randwick on May 28 in the wet.

The J.J. Atkins 2022 is set to run as Eagle Farm Race 7 at 3:13pm (AEST) and full markets, courtesy of Ladbrokes.com.au, are available here.