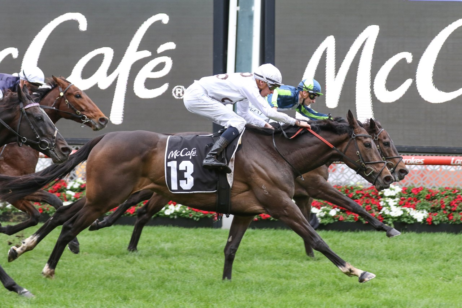 The Moonee Valley Cup, officially the Moonee Valley Gold Cup, is the major distance event held at the Moonee Valley Racecourse during the Melbourne Spring Racing Carnival in late October. The 2500m event usually attracts a niche group of stayers that could be looking to back-up on the first Tuesday of November in the iconic $8 million Group 1 Melbourne Cup (3200m) over the two miles at Flemington.

Now worth a lucrative $1 million in prize money as of 2021, the set weights and penalties event is open to all horses aged four years and over. The October event takes place on the Cox Plate Day that also includes a host of other Group raced headlined by the $5 million Group 1 Ladbrokes Cox Plate (2040m).

The Moonee Valley Cup is part of Ladbrokes Cox Plate Day and in 2021 ran on Saturday October 23, 2021 with the Grahame Begg-trained mare Lunar Flare saluting at $12.

Click here to read more on the narrow victory by Lunar Flare in the 2021 Moonee Valley Gold Cup.

The latest Moonee Valley Cup 2021 odds and betting markets provided by Ladbrokes.com.au will listed below complete with links for you to lock in your Moonee Valley Gold Cup tips at the right price this Cox Plate Day.

The 2021 Moonee Valley Cup field and barrier draw are released on the Wednesday of race week and will be provided in full below once announced.

Nominations on the Moonee Valley Cup in 2021 close the Monday of race week and will be published for the punters in full below.

First held in 1883, the Moonee Valley Cup was originally an eight furlong event when it was won by Castaway. Over the years the event has changed its distance over six times ranging from eight, six and seven furlongs to eleven, twelve, ten, thirteen furlongs. Eventually it became a 2600m race before it was reduced down to 2500m.

Kingston Rule went on to win the Melbourne Cup after winning the Moonee Valley Cup in 1990, but the Cox Plate Day race has produced a number of other Melbourne Cup winners and placegetters since including in 2015 when Prince Of Penzance improved on his second to win the ‘race that stops a nation’ at 100/1 odds.

Trainer Chris Waller prepared the Moonee Valley Gold Cup quinella in both 2016 and 2017, Who Shot Thebarman improving on his second in 2016 to win the 2017 edition over stablemate Libran on way to his fourth Melbourne Cup.

Moonee Valley Cup results, winners and winning times since 2000 are listed below.