Grahame Begg opted not to leave his mare Lunar Flare in the Melbourne Cup entries earlier in the season but has picked up a lovely consolation prize for connections in the $1 million Group 2 Moonee Valley Gold Cup (2500m) on Cox Plate Day. 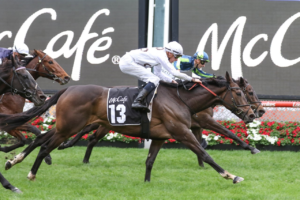 A nicely-bred daughter of Gai Waterhouse’s 2013 Melbourne Cup winner Fiorente, Lunar Flare will not get the chance to emulate her sire but was impressive in winning the lucrative Moonee Valley Gold Cup at The Valley.

The six-year-old presented rock hard fit and in top form on the back of a lead-up win in Mornington’s Listed Harry White Classic (2400m) and was given a perfectly timed ride in the Group 2 by jockey Michael Dee.

“She’s been a model of consistency right throughout.

“She keeps on stepping up.

“We’re so pleased to be able to win for the connections.

“Great race to be able to win.”

It was a tactically run race with no pace throughout as the seven-year-old Good Idea led them around, Dee opting to settle back third last on the eventual winner.

The well-supported Floating Artist meanwhile was deep early pressing on to settle up in fourth then third the outside.

With 500m to go the front runners made a move off the fence and it was Future Score, who had whipped up around the outside at the 1200m, who briefly hit the front to lead around the turn for home before being tackled by Pondus at the 200m.

From second last making ground was the nine-year-old Sound whipping right around them presenting as a huge threat.

Lunar Flare though was quickly on the scene, running down Pondus to hit the front before holding off the luckless Floating Artist to win.

It was far from an ideal run by the beaten one-time favourite Floating Artist whose inexperienced apprentice hoop Teodore Nugent did a few things wrong potentially losing the race for his horse.

In third rounding out the Moonee Valley Gold Cup trifecta was the evergreen veteran Sound for Michael Moroney who held off the beaten favourite Pondus.

Begg made the decision to pull Lunar Flare out of Melbourne Cup contention, but could now target the Group 3 $300,000 Queen Elizabeth Stakes (2600m) at Flemington on November 6 as a spring finale for the honest mare.