The John Sargent-trained Four Moves Ahead was back to winning form third-up enjoying her first victory as a three-year-old ahead of the Group 1 Flight Stakes with a lovely performance in the Tea Rose Stakes 2021 results at Randwick. 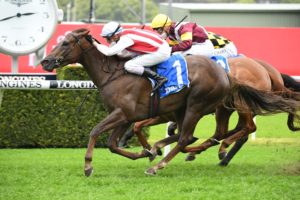 This year’s Group 2 $200,000 Darley Tea Rose Stakes (1400m) was run in the wet with the track downgraded to a Soft (6) and it was talented Snitzel filly Four Moves Ahead who best handled the conditions and her rivals on the day.

Winner of the Group 2 Sweet Embrace Stakes at the same track and under the same Soft (6) conditions as a two-year-old last February, Four Moves Ahead went on to run fourth in both the Group 1 Golden Slipper and Inglis Sires’ over the autumn.

She ran a first-up third narrowly beaten behind Swift Witness in the Group 2 Silver Shadow Stakes before a last start fifth to Jamaea – saved for a Golden Rose Stakes run next week – in the Group 2 Furious Stakes.

Up to 1400m and fit third-up, Four Moves Ahead was given a perfect ride by the in-form Nash Rawiller who posted his third victory of the day.

The race favourite She’s All Class missed the kick in the Tea Rose and was forced to settle last in the run, never featuring as a danger.

The rails-drawn Mallory for Gerald Ryan & Sterling Alexiou also missed the kick but quickly charged around the field to sit second behind the front-running roughie Rockily, while the Gai Waterhouse & Adrian Bott-trained Swift Witness moved into third out wide.

After bounding out well, Rawiller got the eventual Tea Rose Stakes winner on the outside of the lead and slowed the speed, forcing Swift Witness to make an early move as they hit the straight.

He then sat patient aboard Four Moves Ahead, knowing he had them covered, and was rewarded.

Swift Witness took up the lead at the 300m, but Four Moves Ahead surged to her outside and lay it down before hitting the front inside the final 50m and going on to win.

There was a protest for the minors with third (Jason Collette on Mallory) against second (Tim Clark on Swift Witness) which was quickly upheld.

Original runner-up, the tiering Swift Witness was demoted to third having been found to roll out and interfere with the run Collett aboard Mallory who was put off balance the last 100m.

It was all honours to the winner however with Rawiller producing a wonderful ride aboard a good filly who now heads to a mile on Epsom Handicap Day back at Randwick on October 2 for the Group 1 $750,000 Flight Stakes (1600m).

All-in Flight Stakes 2021 betting at Ladbrokes.com.au – available in full here – has Four Moves Ahead into $4 favouritism.