Young Gold Coast trainer Michael Costa celebrated his biggest career win to date after his progressive six-year-old Phobetor claimed some big scalps with a strong win in the 2021 Missile Stakes at Royal Randwick. 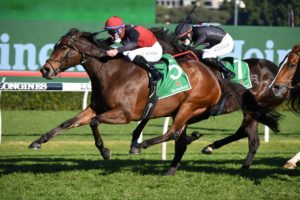 It was a small field gathered for this season’s Group 2 $200,000 Missile Stakes (1200m), moved from Rosehill to Randwick due to COVID, and it was Joe Pride’s returning Group 2 Sapphire Stakes winning mare Fasika and the Chris Waller-trained multiple Group 1 champ Kolding best backed to win.

Those two favourites fought it out in the lead right from the start, Fasika jumping well from the inside alley to lead the Missile Stakes field around with Kolding in second.

It was Dream Ahead gelding Phobetor, freshened-up and brought to the big city off a close second to Southern Lad in the Listed Ramornie Handicap (1200m) at Grafton in early July, getting the gun run third the fence with Tommy Berry aboard.

Fasika was held together at the 400m leading three-quarters of a length from Kolding, ridden up on speed first-up, at the top of the straight.

Berry and his mount however were travelling a long way out, the hoop opting to take a narrow split moving off the fence between Fasika and a fading Kolding to make his move.

Kolding was soon out of contention just lacking fitness fresh, while Phobetor ran over the top of the front-running mare with 100m left to run.

Phobetor went on to hit the line well for a half-length win over a fast-finishing John Thompson-trained Deep Field five-year-old Chat – last start winner of Rosehill’s July Sprint – who was on the scene late having travelled fourth in the run, Fasika holding for third a further half-neck back to round out the Missile Stakes trifecta.

“He (Costa) was under no illusion that we were up against some pretty smart individuals today,” winning hoop Berry told Sky Thoroughbred Central post-race.

“After his run in the Ramornie where he was slow away three wide the whole way…it was a good effort.

“I knew I was there ready to pounce…Kolding he’s best performed once he gets to 1400m the mile…my guy as soon as he burst through he was the winner.

“He’s a beautiful big horse, a lovely type and he’s into it at the right time of year.”

There looks now to be a host of upcoming Sydney Spring Racing Carnival targets for the Phobetor who remains lightly-raced for his age having just his 12th start for his seventh win in the Missile.