The Group 1 Canterbury Stakes in March is on the cards next-up for brilliant Godolphin-raced mare Savatiano who was back in a big way dominating the Expressway Stakes 2021 results at Rosehill Gardens. 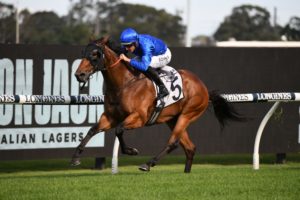 Premier hoop Hugh Bowman took control of the race right from the start stealing the show after going to the front aboard the now six-year-old daughter of Street Cry in this year’s Group 2 $200,000 Expressway Stakes (1200m).

The mare got into a lovely rhythm and, in her first start since saluting in the Group 2 Hot Danish Stakes (1400m) at the same track last November, never looked in doubt.

The Chris Waller-trained gelding Kolding, whose career earning sit just shy of $5.9 million, got up into a clear third in running also first-up in the Expressway and presented as the only potential danger.

On the straight he moved up to challenge, but Bowman rated the eventual winner perfectly and Savatiano was going too well.

After controlling the race, she cruised ahead extending her lead after giving a beautiful kick for a stylish victory ahead of Kolding who was brave in defeat and looking for a firmer track.

Also good resuming was Emeralds for John Sargent, the four-year-old Sebring mare getting up into third to round out the trifecta.

The Expressway Stakes result was the fifth Group 2 success for the classy Savatiano who will now be kept fresh for her shot at a maiden elite level win in the $500,000 Canterbury Stakes over 1300m on March 6.

“There’s every likelihood she’ll be kept fresh for the Canterbury Stakes, which is in March,” Cummings told Sky Thoroughbred Central after the win.

“She’s returned well as you can see.

“She takes control of these sort of races and she’s very, very mature now.

“I think she may be capable of repaying the faith and I’d like to think she’s be very hard to beat in the Canterbury Stakes.

“In March she’ll be fresh and ready to go…and she’ll be very good there.”