Overpass was too good leading all-the-way thanks to a gun ride by Tim Clark in an upset 2022 Expressway Stakes result at Rosehill where gun colt Anamoe was far from disgraced running a first-up third with excuses. 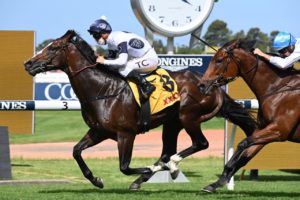 In a beautiful ride from Clark, the master front-running hoop took the initiative to go forward and snared some cheap sectionals before scoring an upset win in the feature race in Sydney.

The Bjorn Baker-trained Vancouver colt had no luck last preparation drawing a host of bad gates, but showed something when sixth only four lengths beaten down the Flemington straight behind Home Affairs at big odds.

He presented in excellent order kicking off his autumn campaign in the Expressway off two good lead-up Sydney trials and was always in control up front before giving a good kick on the straight.

“We will positive today with the rail out…he was well and truly wound-up and we used that to our advantage today,” Clark told Sky Thoroughbred Central post-win.

“He’s come back in good order.

“He looks like he’s in for a good preparation.”

Overpass went on to beat Richard & Michael Freedman’s class mare Forbidden Love who looked back to her best in a strong second after getting off the fence to present a late challenge inside the final 50m before crossing a half-length off the winner.

As for Godolphin’s returning Caulfield Guineas hero and Cox Plate runner-up from the spring, Anamoe lost few admirers a further long neck back rounding out the Expressway Stakes trifecta in third.

The gun galloper was wedged between runners at the back the early stages, got into the clear at the top of the straight but brushed with Tiger Of Malay at the 200m losing a touch of momentum.

The well-backed favourite tried hard but ran out of time, sure to improve over further with bigger autumn assignments coming up.