A master training performance by Joe Pride saw Brutality race for the third Saturday on the trot to produce an explosive performance in the Villiers Stakes 2021 results earning a spot in the autumn’s Group 1 Doncaster Mile (1600m) during ‘The Championships’. 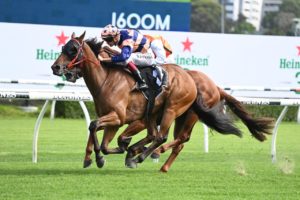 Brutality is into the 2022 Doncaster Mile field next autumn after winning the $750,000 Villiers Stakes at Randwick. Photo: Steve Hart.

Pride did not hesitate to back his five-year-old Shamus Award gelding Brutality up for the third straight weekend for a shot at the Group 2 $750,000 Villiers Stakes (1600m).

The progressive galloper was fourth two back behind Ellsberg in the Group 3 Festival Stakes (1500m) and fourth last weekend in a Benchmark 88 over 1400m at Rosehill carrying 60.5kg.

The horse dropped right back in weight with just 53kg in the Villiers Stakes, in-form hoop Regan Bayliss retaining the ride and producing a peach of a performance on the winning galloper.

“He was spot-on today. He dropped seven and a half kilos.

“If anything, he showed a better turn of foot on top of the ground today. He had a beautiful run in transit and he won accordingly.

“He just keeps improving this horse. Every time he’s come back he’s raised the bar for us.

“As long as he keeps improving with a light weight, I’m sure he’ll be a chance (in the Doncaster Mile 2022).”

Relishing a step up to a mile and the give out of the ground at Royal Randwick, Brutality was huge late letting down with a powerful run out wide on the home straight.

He was too good the closing stages running down his conqueror in the Festival Stakes, Ellsberg, to post a dominant one and a half-length win over the brave runner-up in a time of 1 minute 37.26 seconds.

In third rounding out the Villiers Stakes trifecta having made up all the ground coming from last on the turn was the always-honest James Cummings-trained Criaderas who just held out Pride’s other runner Stockman (4th).

Pride was thrilled to pick up another feature race win over the Randwick mile adding to his Group 1 Epsom Handicap success this year with Private Eye, also ridden to victory by Bayliss.

“That was a fantastic result. The three weeks in a row was obviously the key for this horse getting into this race in peak fitness,” Pride told Sky Thoroughbred Central after the race.

“He’s not a big robust horse, but he just needs racing to settle.

“It was a peach of a ride by Regan.

“Fantastic result. Big effort from the team at home.

“It’s been a fantastic 12 months. Culminates with a day like this and it’s great to be a part of it.”

Pride is now looking ahead to a terrific Sydney Autumn Racing Carnival including the Group 1 $3 million Doncaster Mile (1600m) on April 2, 2022 for which Brutality is now guaranteed a run.

“He gets a spot in the Doncaster, which his great he’d need a wet track to be really effective in it,” Pride said.

“The autumn looks really good. We’ve got the strongest team we’ve ever had going into a carnival.”

As for his fourth placegetter in the Villiers, Pride confirmed plans to back Stockman up in the Group 3 $160,000 Summer Cup (1600m) on Boxing Day.

“Stockman was very good there today I’ll bring him back for the Summer Cup here on Boxing Day,” he said.