Trainer Peter Moody celebrated his fourth success in the Group 3 $200,000 Quezette Stakes (1100m) at Caulfield on Saturday thanks to a nice win by his well-supported filly Gimmie Par. 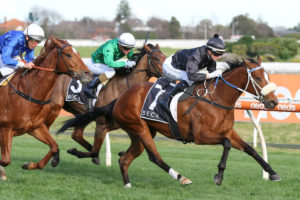 The stable has been patient with this progressive daughter of Not A Single Doubt opting to turn her out after her narrow win at this track and distance back in April ahead of the spring, and they were rewarded in the 2021 Quezette Stakes results.

On debut Gimmie Par ran second down the Flemington straight behind Ingratiating in the Listed Talindert Stakes (1100m), the form of which has now well and truly been franked.

Ingratiating went on to place in both the Group 1 Blue Diamond (2nd) and Group 1 Golden Slipper (3rd) during his two-year-old campaign, and also won the colts’ and geldings’ equivalent to the Quezette when taking out the Group 3 Vain Stakes one race earlier on P.B. Lawrence Stakes Day.

Gimmie Par had star female hoop Jamie Kah aboard fresh and the filly was very good without a lead-up trial into the Group 3 field that attracted 14 starters.

The hot favourite settled just off the speed as See You In The Spring led them around, Gimmie Par racing around in fifth deeper out on the track.

Once on the home straight Kah moved up the middle aboard the top elect as the returning Godolphin-raced Street Boss filly Heresy – last seen winning a Group 3 over 1200m at Morphettville in mid-May – chimed in with her run down the outside.

Gimmie Par ($2.70) moved up strongly to take the lead at the 100m and charged to the line a half-length ahead of Hersey ($12), while John Moloney’s consistent Nicconi filly Scored Earth ($15) after an on-speed run held for third to round out the Quezette Stakes trifecta.

The market was spot-on in the event with all the money for Gimmie Par who got a smooth run in transit before scoring the solid victory ahead of an open campaign yet to be mapped out.

“Good win, she’s come into it a little bit soft and she’s open to nice improvement which is pleasing and very important,” Moody told Racing.com after the victory.

“Now a very valuable little girl with a Group win by her name.

“I haven’t set anything beyond today…I’d think she’s not going to be in for a busy spring.”

While yet to lock in the next-up target for his Quezette Stakes winner, Moody did all but rule out setting Gimmie Par for a shot at the Group 1 $1 million Thousand Guineas (1600m) back at the track on Wednesday the 13th of October, 2021.

“She doesn’t strike me as a Guineas filly. I think the mile here at this stage of her career might just test her a bit so we’ll keep her to that five and a half / six furlong mark and pick our way carefully through them,” he said.

Still, the bookies are taking no chances and are keeping Gimmie Par safe in all-in 2021 Thousand Guineas betting at $12 through Ladbrokes.com.au – full markets for which are available here.