The Group 1 $2 million Coolmore Stud Stakes (1200m) this Melbourne Cup Carnival looks the ultimate goal for impressive first-up 2021 Vain Stakes winner Ingratiating who ran over the top of his rivals late in the Group 3 at Caulfield. 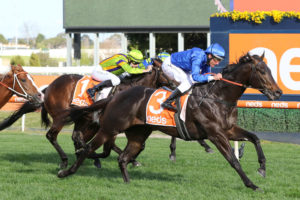 The James Cummings-trained Frosted colt enjoyed an excellent two-year-old season in the autumn with Group 1 placings in the Blue Diamond Stakes (2nd) and Golden Slipper (3rd) and returned with a bang in the Group 3 $200,000 Neds Vain Stakes (1100m) on P.B. Lawrence Stakes Day.

Emulating the stable’s success in the same race two years ago with Bivouac (2019) who won the Vain Stakes fresh by nearly five lengths that spring, Ingratiating was given a patient and well-timed ride by Damien Oliver.

Oliver allowed the young colt to settle last in the small field as General Beau and the previously undefeated Generation on the rails led them around.

With the blinkers off, Ingratiating settled beautifully and got into a lovely rhythm before letting down late and showing a terrific turn of foot to run right over the top of them the final 100m.

On the line he had around a length to spare on the brave runner-up General Beau, the Brazen Beau colt racing for the first time since his Blue Diamond fifth back in February, while the Ciaron Maher & David Eustace-trained Snitzel colt Generation held for third to round out the Vain Stakes trifecta.

Godolphin representative Sean Keogh said the team were impressed with the first-up performance of Ingratiating who looks set to target the 2021 Coolmore Stud Stakes on October 30 as part of VRC Derby Day.

“I’m sure James and the team have some high hopes for him he’s two for three down the Flemington straight,” he told Racing.com post win.

“I’m sure the way he won today the guys will be very impressed.”

“You have to image that (the Coolmore Stud Stakes) wouldn’t be out of the question considering his good record down the straight and we’re very impressed with what we saw today.”

Bivouac ran second in the 2019 Vain Stakes for the Royal Blue brigade following his Vain Stakes victory with a host of good runs in between including success in Sydney’s Group 1 Golden Rose Stakes (1400m).

Ingratiating is at a current quote of $9 in all-in Coolmore Stud Stakes betting through Ladbrokes.com.au, full pre-field markets for which are available here.