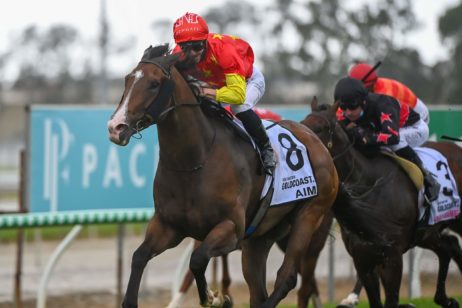 Offering a lucrative $2 million in prize money plus trophies worth $5,000 the Magic Millions 3YO Guineas holds Restricted Listed status and is contested at set weights plus penalties over 1400m.

Alternatively the three-year-olds in the race could be first-up after their spring campaigns that could have seen them run in races like the Group 2 Sandown Guineas (1600m) in November. The Wyong Magic Millions 3YO & 4YO Stakes (1200m) in December is another traditional lead-up to the lucrative race in Queensland the following month.

After the Magic Millions Guineas at the Gold Coast many horses go on to contest autumn races including the Group 1 Australian Guineas (1600m) at Flemington in Melbourne in early March.

After the short-priced favourite Isotope lost her rider Ryan Maloney on the straight, it was an upset 2021 Magic Millions 3YO Guineas result was the recently gelded Peter & Paul Snowden-trained Aim ($31) relished a firmer track to beat home fellow roughie Amish Boy ($31) by one and three-quarter lengths. The also Ciaron Maher & David Eustace-trained Away Game ($4.60), winner of the Magic Millions 2YO Classic last summer, finished third as the beaten favourite looking a little unsuited to the 1400m.

Click here to read more on the shock 2021 Magic Millions 3YO Guineas win by Aim.

Alligator Blood saluted for the punters as the odds-on favourite in the 2020 edition of the race before being subsequently disqualified.

The official Magic Millions 3YO Guineas 2021 field of final acceptances is set for release in early January and will be published in full below.

See below for a full list of Magic Millions 3YO Guineas winners going back to 2001 including winning jockeys, trainers and times.

The Everest Horses Face Off in...

The quinella out of the Group 1 Memsie Stakes – Behemoth and Beau Rossa – face...

Peter Moody officially returned to the Group 1 winner’s stall at Flemington on...

Kerry Parker’s George Ryder winner Think It Over was excellent at Royal...

The sky is the limit for Annabel Neasham’s returning star Zaaki who picked up...

The Robert & Luke Price-trained Jamaea atoned for her luckless first-up...

2021 Chelmsford Stakes Results: Think It Over Wins In Photo Finish