It was a shock result in the 2021 Magic Millions 3YO Guineas with the Peter & Paul Snowden-trained Aim returning to his best at big odds as the short-priced favourite Isotope dislodged her jockey Ryan Maloney in a disappointment for the punters. 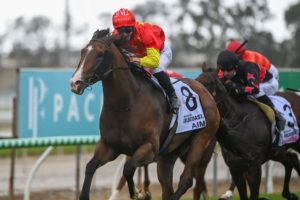 Aim scored an upset at 30/1 in the 2021 Magic Millions 3YO Guineas at the Gold Coast. Photo: Steve Hart.

Maloney was quick to his feet after falling off the well-supported Tony Gollan-trained Deep Field filly Isotope in this year’s $2 million Magic Millions 3YO Guineas (1400m) at the Gold Coast, but it remained a bitter result for horse and hoop.

Having won back-to-back Black-Types at Doomben in December, Isotope was the one the punters were on and she was tracking beautifully in behind last year’s Magic Millions 2YO Classic winner Away Game as they entered the home straight.

She somehow got unbalanced however, Maloney falling off his mount, while Isotope finished off the race riderless and unharmed but unable to be counted in the official Magic Millions 3YO Guineas results.

Instead it was a 30/1 pop in the recently gelded Aim for Team Snowden who stole the show in a result co-trainer Paul Snowden was not in fact surprised by.

“We were pretty confident,” he told Thoroughbred Central after the race.

“He just needed to get back on firm going…and we kept running into wet tracks.

“He was a good class horse as a two-year-old.

“He’s back as a gelding this preparation and it’s good to bloody win one I tell you!”

The son of Star Witness was a back-to-back winner when kicking off his juvenile campaign in December 2019 before his eighth to the Ciaron Maher & David Eustace-trained Away Game in the Classic on this day 12 months ago.

He had failed to live up to expectations and, after a sale to Hong Kong fell through, the team decided to geld him and race on knowing they just needed to strike a dry track for the horse to race well.

“He was sold, but the money didn’t come through so we just played on and he’s made up for that today,” Snowden said.

First-up Aim was unplaced on a Heavy (8) at Kensington in Sydney, before he showed massive improvement at the Gold Coast on better ground to take out the Guineas with James McDonald in the saddle.

It was a great result for McDonald who, off a luckless wide run at the back aboard the Chris Waller-trained She’s All Class the start before, had had to settle for third behind her stablemate Shaquero in this year’s Magic Millions 2YO Classic result.

Aim dominated in the end posting a one and three-quarter length victory over the second-placed Maher & Eustace-trained Amish Boy ($31) ridden by Magic Millions Classic winning hoop Hugh Bowman, while his better-fancied stablemate Away Game ($4.60) ran third just struggling that little bit second-up over the 1400m.