The George Moore Stakes is a Group 3 sprint held at Doomben Racecourse during the Brisbane Summer Racing Carnival. 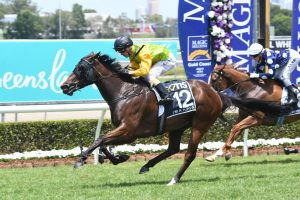 The 2019 George Moore Stakes is a Group 3 sprint currently held at Doomben Racecourse in Brisbane in late November or early December as one of the key summer features in Queensland.

Held under quality handicap conditions, the George Moore Stakes is raced over 1200m and offers $200,000 in total prize money. The race takes place on the same day as Perth’s $1 million Winterbottom Stakes.

The George Moore Stakes is open to contention by horses of all ages and sexes. It shares a race program with only one other black-type event, the Listed Mode Plate (1200m) for three-year-old fillies at set weights.

Some runners use the event as a first-up race after a spell in the paddock while others might be racing off the back of a spring carnival down south in NSW and Victoria.

Horses that run well in the George Moore Stakes field may head to Sydney for a shot at the Group 2 Villiers Stakes (1600m) a fortnight later at Royal Randwick.

The 2019 George Moore Stakes ran on Saturday November 30, 2019 at Doomben Racecourse and was won narrowly by Chapter And Verse.

The latest 2019 George Moore Stakes odds on the final field of sprinters complete with links to the markets at Ladbrokes.com.au for you to lock in your George Moore Stakes Betting Tips at the hottest summer racing odds will be available below the week of the race.

The official 2019 George Moore Stakes Final Field & Barriers will be announced in full below once released on the Wednesday of race week by Queensland Racing.

The George Moore Stakes 2019 field features 16 gallopers with Crack Me Up to carry the hefty 60kg topweight from out wide in barrier 15.

The George Moore Stakes nominations are finalised and publicly announced on the Monday prior to the race, the full list of early entries to be published below once released.

The 2019 George Moore Stakes nominations attracted 19 hopefuls including three for top local trainer Tony Gollan led by the pre-field favourite Outback Barbie who comes off a first-up win in the Keith Noud Quality.

Throughout the years, the George Moore Stakes has gone by a variety of names. From its inception to 1986 the race was called the XXXX Stakes. It has also been named the Thornhill Park Stakes, LJ Williams Quality Handicap and AWA Stakes. Between 2000 and 2006, as well as several years previously, it was called the Summer Stakes.