Jamie Kah’s brilliant season continued at Caulfield on Saturday with another flawless ride aboard Prophet’s Thumb in the Group 2 Rubiton Stakes. 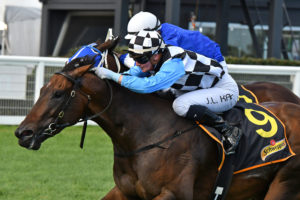 Kah capped off her day with three winners across the program, but her ride aboard the Freedman-trained mare was far and away the pick of the lot after overcoming a three-wide position to hold on for a narrow win.

Despite boasting a strong fresh record, the daughter of I Am Invincible went around at $7.50 in the markets at Ladbrokes.com.au as punters instead zeroed in on Greyworm and Viridine.

As expected, Greyworm set the tempo up front, but simply ran out of steam over the final furlong as Prophet’s Thumb stormed home down the middle.

The five-year-old raced well without winning last time in work finding the money Listed company at Morphettville, Caulfield, and Moonee Valley during the Spring.

Her race day temperament can sometimes make life difficult, but Kah’s cool hand proved the difference steering for the first time on Saturday.

“She got cover three-wide and they finally crossed to the fence at the turn and a gap opened up. She was really relaxed today and she was in a good mood,” Kah told racing.com.

Prophet’s Thumb has never raced at Group 1 level before, but she could be well on her way to the 2021 Oakleigh Plate back at Caulfield in a fortnight’s time as she hopes to become the third horse to complete the double.

Bold Star stuck on well for second under Mark Zahra on Saturday, while Garner showed plenty of fight in his return to the races for third.