Anamoe is the clear odds-on favourite to return to winning form in the wet racing third-up in the Group 1 $1 million Randwick Guineas (1600m) on a rain-soaked Randwick track this weekend. 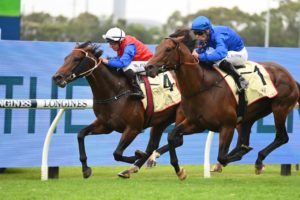 Currently two horses have come out of the 2022 Randwick Guineas field due to the Heavy (10) track in Sydney on Saturday with Forgot You (7) and Ranch Hand (1) both heading south to instead contest Flemington’s Group 1 Australian Guineas (1600m).

Updated Randwick Guineas betting markets at Ladbrokes.com.au on the remaining three-year-olds in the Sydney event have the James Cummings-trained Anamoe at $1.80 and firming.

Coming into gate eight for James McDonald, who won the race aboard the Kiwi Dundeel back in 2013, the Godolphin-raced Street Boss colt has his first official start on Heavy going.

His previous Soft track form has been excellent (4:2-2-0) suggesting he can handle the bottomless course this weekend and add a second Guineas win to his name after his Group 1 Caulfield Guineas (1600m) victory in the spring.

The Expressway Stakes form was franked last Saturday with the second-placed mare Forbidden Love winning the Group 2 Guy Walter Stakes, and she is also favourite for her elite level run on Randwick Guineas Day in the Group 1 Canterbury Stakes (1300m).

The only foreseeable dangers according to the bookies are the other place-getters out of the Hobartville Stakes trifecta Hilal and Converge at Randwick Guineas odds of $6 and $5.50 respectively

The Gai Waterhouse & Adrian Bott-trained Converge comes off back-to-back thirds this prep, the Frankel gelding having also run in the money fresh behind Paulele in the Group 3 Eskimo Prince Stakes (1200m) when carting 60kg.

He is after his first victory since a two-year-old triumph in Brisbane’s Group 1 J.J. Atkins (1600m) last June, which he won by over three lengths, and he is out over a mile for the first time since here.

Hobartville runner-up Hilal meanwhile could prove the value looking to turn the tables on his last start conqueror over more distance on Saturday.

He was fifth in the Eskimo over the six furlongs and improved notably in the Hobartville only beaten a neck with improvement to come ahead of the rematch.

Outside of the dominant trio the best of the roughie hopes chasing an upset look to include the Bjorn Baker-trained Pierro colt War Eternal coming ff a Rosehill win from February 19 and first-up Group 2 Autumn Stakes winner at Caulfield on February 12 Coastwatch for Chris Waller.

The 2022 Randwick Guineas is set to run as Randwick Race 8 at 4:40pm (AEDT) on Saturday with full markets courtesy of Ladbrokes.com.au available here.