Forbidden Love is new favourite to add the Group 1 $500,000 Canterbury Stakes (1300m) to her CV this weekend with the withdrawal of Zaaki from the line-up. 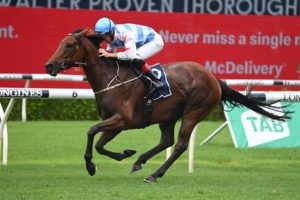 The wild weather in Sydney has continued this week and there is another Heavy (10) track ahead of Randwick Guineas Day 2022.

That has seen trainer Annabel Neasham opt to withdraw resuming Mackinnon Stakes champ Zaaki from the field in favour of a first-up run in Flemington’s Group 2 Blamey Stakes (1600m) on firmer going.

On a quick back-up after dominating last weekend’s Group 2 Guy Walter Stakes (1400m) on a rain-soaked Randwick track by over three lengths, she is now at $3 Canterbury Stakes odds at Ladbrokes.com.au to salute in the wet again.

Hugh Bowman retains the ride on the four-year-old daughter of All Too Hard with Forbidden Love out to go back-to-back in the event for the mares following the success of Savatiano (2021) last Sydney Autumn Carnival.

Following closely at $4 is fellow mare Lighthouse, the in-form grey jumping from barrier two with Zaaki’s hoop James McDonald coming aboard for the ride.

In a tight top half of the market a further two runners are also under double-figures for the win with Zaaki’s stablemate Laws Of Indices ($5) still in the mix for the stable and the returning Joe Pride-trained Private Eye ($5.50).

Four-year-old Power entire Laws Of Indices debuted for Neasham down under following his import from the UK last October when fifth under two lengths off I’m Thunderstruck in the $7.5 million The Golden Eagle (1500m) on a very firm Good (3) Rosehill track.

Put away after that he returned on February 12 in the Group 3 Southern Cross Stakes (1200m) here when fifth behind Lost And Running, but is tipped to improve second-up with his better form on softer going.

Private Eye gets his autumn underway in the Canterbury Stakes field coming into barrier six with Regan Bayliss coming aboard the spring’s Group 1 Epsom Handicap champ over the mile.

A Golden Eagle eighth and Gorup 1 Mackinnon Stakes fifth behind Zaaki in Melbourne over 2000m followed and he ticks plenty of boxes fresh in the Canterbury including his outstanding record at the distance (4:3-0-0).

Private Eye is also two-from-two on Heavy tracks and has a 50% winning strike-rate fresh making him a definite danger in a very open race.

The 2022 Canterbury Stakes is set to run as Randwick Race 7 at 4:00pm (AEDT) with the latest markets from Ladbrokes.com.au available in full here.