It was an exciting finish in the Moonee Valley Vase 2021 on Cox Plate Day with the Trent Bussutin & Natalie Young-trained stablemates Forgot You and Commander Harry running the quinella ahead of next weekend’s Group 1 $2 million Victoria Derby (2500m) at HQ. 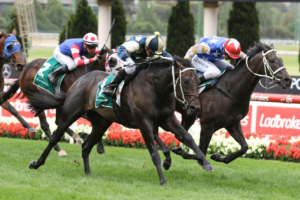 Forgot You is favourite for the Victoria Derby off a game win in the 2021 Moonee Valley Vase. Photo: Ultimate Racing Photos.

Class Savabeel colt Forgot You is favourite in all-in Victoria Derby betting at Ladbrokes.com.au after making it three-from-three at The Valley with a late win over his roughie stablemate Commander Harry who looked to steal the show in the Group 2 $300,000 Moonee Valley Vase (2040m).

“Absolutely fantastic. We’ve got a share of Forgot You so I was kind of glad he got the bob there,” co-trainer Young told Racing.com after the win.

“He always leaves us with our heart in our mouths and it’s good to have two live Derby contenders for next Saturday.”

In a game move, jockey Linda Meech took off a long way from home aboard 100/1 shot Commander Harry dropping the favourite Forgot You and getting out to notable lead.

It took the entire length of the straight, but in the end a patient ride by the flying Daniel Moor saw Forgot You grind down the tearaway leader and salute for the punters as the $2 favourite.

A three-time Group 1 winning hoop for the season following Friday night’s Manikato Stakes victory, Moor was a long way off the leaders aboard Forgot You in the Vase.

But he took his time, never panicking and was able to reign in Meech’s mount.

“A great ride by Daniel, he’s flying at the moment with three Group 1s,” Young added.

In third rounding out the Moonee Valley Vase trifecta a further one and a half lengths back from the Busuttin/Young quinella was Jungle Magnate ($26).

With a lovely staying pedigree, all roads now lead to next week’s Derby for Forgot You who also remains in the entries for the Group 1 $8 million Lexus Melbourne Cup (3200m) just three days later.

Forgot You is into $3.50 to win the Victoria Derby – full all-in markets courtesy of Ladbrokes.com.au for which are available here – and is $51 in futures Melbourne Cup 2021 betting.

Commander Harry could also back-up in the Derby off his brave run and is at $26.