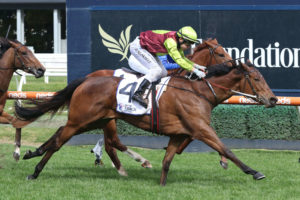 Kevin Corstens’ underrated Bon Hoffa filly Bon’s A Pearla went around at big odds in the Group 2 $300,000 Prelude over the 1400m at Caulfield rising notably in grade off a maiden win at Sandown on September 1.

At her fourth start she made her Black-Type debut and took on a nice field of fellow three-year-old fillies including the Godolphin-raced favourite Hersey.

After racing wide early stages, well-performed Street Boss filly Hersey looked to have things wrapped up hitting the front inside the final furlong.

But quick on the scene to rain on the punters’ parade was the eventual winner, Bon’s A Pearla letting down in a brilliant late burst of speed to run down the favourite and win.

Following a brief hail storm, the weather cleared and allowed the opening Group race of the day to take place under sunny skies.

It was Xtra Gear leading from the jump setting only a moderate pace at best before quickening approaching the turn.

Heresy was closing fast and moved up to take the lead at the 150m, before the late dive by Bon’s A Pearla who ran through the line extremely well with Maskiell timing the winning ride to perfection.

In third rounding out the Thousand Guineas Prelude trifecta was the Anthony & Sam Freedman-trained Elusive Express who made up all the ground from last in running.

“Jason’s a big supporter of ours, he sticks with us. It pays to be loyal sometimes.”

All-in 2021 Thousand Guineas odds online at Ladbrokes.com.au are available in full here with Bon’s A Pearla expected to be added to the markets.