Nominations for the Caulfield Cup 2021 closed today, Tuesday August 3, with 170 stayers making-up the early entries for the $5 million classic running on Saturday October 16, 2021. 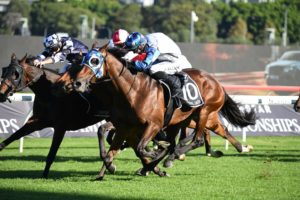 Instead there is a greater chance she will run in the $5 million Ladbrokes Cox Plate (2040m) at The Valley on October 23 while Verry Elleegant also featured in the 174 Melbourne Cup 2021 nominations taken today.

The son of Shamus Award extended his winning streak for his former trainer Steve Tregea to six on the trot with an incredible 12-length victory in Brisbane’s Group 3 Tatt’s Cup (2400m) that stamped him as the stayer to watch ahead of the spring majors.

There’s also plenty of early hype on the Hawkes Racing-trained Mount Popa for his Caulfield Cup bid after a nearly three-length win in the Listed Mornington Cup (2400m) back in March.

The Ciaron Maher & David Eustace-trained son of Jakkalberry is one of bumper 19 Caulfield Cup nominations for the stable along with reigning Cox Plate champion Sir Dragonet who has been entered for both races along with the Melbourne Cup in 2021.

Of the international Caulfield Cup nominated horses one of the shortest-priced in the current markets is veteran Prince Of Arran.

Charlie Fellowes’ dual Melbourne Cup placegetter (2nd in 2019, 3rd in 2020), Prince of Arran’s only run outside the top three from eight starts down under was his fourth in last year’s Caulfield Cup results.

Waller meanwhile has a further 16 Caulfield Cup nominations along with Verry Elleegant in his shot at back-to-back wins by a trainer with his contingent led by ATC Oaks winning filly Hungry Heart.