Early entries for the Spring Cups were taken today, Tuesday August 3, with the 2021 Melbourne Cup nominations attracting 174 horses for the 161st edition of the ‘race that stops a nation’. 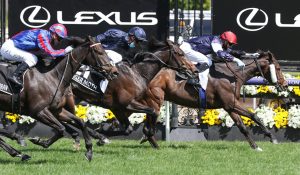 Last year there were 30 internationals featuring in the Melbourne Cup nominations, including the subsequent winner Twilight Payment who went on to defeat two fellow raiders – Tiger Moth (2nd) and Prince Of Arran (3rd) – in an all-international Melbourne Cup 2020 trifecta.

Unsurprisingly international numbers are down this spring with 16 holding a collective 28 nominations across the Cox Plate, Caulfield Cup and Melbourne Cup entries this season.

Twilight Payment is again among the 2021 Melbourne Cup nominations, one of four for reigning trainer Joseph O’Brien.

O’Brien celebrated his second ‘Loving Trophy’ last season, while prolific owner Lloyd Williams will be in the hunt for an historic eighth win this year after Twilight Payment gave him a seventh.

The 2019 runner-up and last year’s third placegetter, the Charlie Fellowes-trained Prince Of Arran for star hoop Jamie Kah, also returns looking to add to his imposing record down under.

The horse has had eight runs on Australian turf with his Caulfield Cup fourth to Verry Elleegant last year his only finish out of the top three.

The other former Melbourne Cup winner chasing another victory in the world’s richest handicap meanwhile is the Danny O’Brien-trained local star Vow And Declare who won in 2019 before a disappointing 18th last year.

That demolition job was his sixth win on the trot and markets suggest he’ll be the stayer to beat in the Victorian spring features upon his highly-anticipated return.

“Today’s release of nominations officially begins the countdown to the 2021 Victorian Spring Racing Carnival, and represents an exciting time for racing fans and punters who will begin poring over the entries and choosing their horses to follow this spring,” Greg Carpenter, Racing Victoria’s (RV) Executive General Manager – Racing, said.

“Can Denis Pagan create more history and train a Melbourne Cup winner? Can Edward or James Cummings join their grandfather Bart as a Cup winner?

“There are so many great questions to be answered.”

The now four-year-old is among both the Caulfield and Melbourne Cup nominations this spring and success in the latter would see him become just the 17th horse in history to complete the Victoria Derby – Melbourne Cup double.

Edward’s more famous brother, James Cummings, is also in Melbourne Cup contention with his classy mare Colette while their father Anthony has nominated Nancho for all of the ‘Big 3’ spring features.

Realm Of Flowers meanwhile has secured the only confirmed spot in the 24-horse Melbourne Cup field to date via a win in last year’s Listed The Andrew Ramsden (2800m).

Twilight Payment is again among the 2021 Melbourne Cup nominations, one of four for reigning trainer Joseph O’Brien.