It was a battle of the big Blues in the 2021 Canonbury Stakes results with the Godolphin-raced Zethus just nudging out the Coolmore favourite Home Affairs in a thrilling edition of the $3.5 million Golden Slipper lead-up at Rosehill. 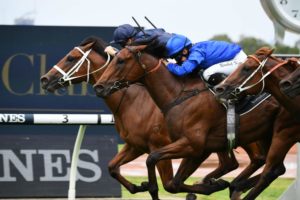 Zethus scored an upset win in the 2021 Canonbury Stakes ahead of a potential Golden Slipper target this autumn. Photo: Steve Hart.

The money was on Chris Waller’s exciting I Am Invincible colt Home Affairs, an $875,000 purchase, to salute on debut in the Group 3 $160,000 Canonbury Stakes (1100m) after his exciting trial win at the track on the 15th of January.

Home Affairs got a lovely trail second on the outside of Surplus Value, the front runner pinging out of the gates to hold a comfortable lead in the Canonbury Stakes, while Zethus was ridden more prominently in fourth by Rachel King.

After the good start, Surplus Value held the lead but the favourite Home Affairs was travelling very strongly, moving up on the outside approaching the turn for home to challenge.

Jockey James McDonald started to let down 200m out from the line on the punters’ pick who looked off and gone after breaking clear, but Zethus with the fitness edge was running on well behind him.

Zethus lunged and nailed Home Affairs right on the line in an upset Canonbury Stakes result, with a good performance by the John O’Shea-trained colt Sing A Love Song at odds to run third.

Both Zethus (2nd) and Sing A Love Song (3rd) came out of the same lead-up race at Rosehill from January 16 won by Remarque.

“He had plenty of improvement in him before his debut and I think he’s backed it up today,” Cummings told Sky Thoroughbred Central post-win.

“He knuckled down so strongly against a very classy colt.

The bookies reacted immediately with Zethus slashed from $51 into $26 in the all-in Golden Slipper odds at Ladbrokes.com.au to claim the world’s richest race for two-year-olds back at the track on March 20.

The beaten favourite Home Affairs remains steady at the same price in the futures markets looking a genuine dry track horse deserving of another chance on firmer ground.

The colts ran 1:06.62 in the Canonbury, a much slower time than the 1:06.03 Widden Stakes winner Mallory won the fillies’ equivalent one event earlier.

“It’s only the end of January,” Cummings added.

“There’s quite a few steps to take before we get to the really big races but he’s doing everything right so far.

“He’s got a lot of upside and he’s got the best attitude…that’s probably the most important.

“He’s going to have absolutely no trouble when he steps out over more distance next time.”