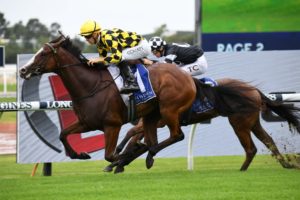 With Rosehill rated a Soft (7), it was a box most of the young fillies had to tick off and, in the end, the easing favourite Mallory was the one to prove herself in the wet.

The spring’s Group 3 Gimcrack Stakes third placegetter Total Babe for seven-time Golden Slipper winning trainer Gai Waterhouse exploded out of the gates to take up a comfortable lead in the Widden Stakes.

She led throughout and into the turn with the late challenge coming from the exciting daughter of Not A Single Doubt, Mallory, who had finished one ahead of Total Babe when runner-up at Randwick in the Gimcrack behind Enthaar last October.

Ridden again by Jason Collett, Mallory got into the clear up the middle to level up to the speedy front runner before stretching out and pulling away over the final fifty metres in a brilliant finish.

The also well-support Vianello for Godolphin finished off the Widden Stakes trifecta in third.

It was a good chase and quality win for the up-and-coming Mallory who ambled around mid-stage before balancing up well and finishing off strongly.

She now firmly enters Golden Slipper calculations having displayed a lovely racing style and terrific attitude, sticking her neck out on the line.

The bookies reacted soon after the Widden Stakes results with the winning filly firming in from $51 to $26 in the all-in Golden Slipper 2021 odds at Ladbrokes.com.au.

Overreach (2013) and Mossfun (2014) are the only fillies to have completed the Widden Stakes – Golden Slipper double.