The Let's Elope Stakes is a Group 2 race for mares held at Flemington Racecourse in September as part of Makybe Diva Stakes Day. 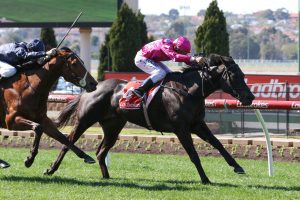 Held during the early stages of the Melbourne Spring Racing Carnival, the Group 2 Let’s Elope Stakes is named in honour of racing champion and 1991 Melbourne Cup winner Let’s Elope.

The 1400m race takes place at Flemington Racecourse in early – mid September on Makybe Diva Stakes Day and is worth $200,000 in prize money. Many of the Let’s Elope Stakes runners will come via the Group 3 Cockram Stakes (1200m) held earlier at Caulfield and could continue onto the Group 1 Myer Classic (1600m) – now known as the Empire Rose Stakes – back at Flemington during the Melbourne Cup Carnival.

No mare has completed the Let’s Elope Stakes – Myer Classic double in the same season however since Rose Of Portland (1996).

The latest edition of the 2019 Let’s Elope Stakes ran on Saturday September 14, 2019 and was won by Spanish Whisper.

The 2019 Let’s Elope Stakes winner by a half-length was the Lindsay Park-trained Spanish Whisper who improved on a lead-up second in the Cockram Stakes.

The spring’s top Let’s Elope Stakes 2019 betting markets and links to the odds at Ladbrokes.com.au on the hopeful mares racing in the Group 2 Flemington race will be provided for punters below once released.

The Let’s Elope Stakes field attracts a quality line-up of mares each Melbourne Spring Racing Carnival who may have had an earlier run in the Cockram Stakes a fortnight prior, which is the traditional lead-up into the Flemington clash.

The official Let’s Elope Stakes 2019 field & barriers are released the Wednesday leading-up to Makybe Diva Stakes Day and will be published below once announced.

The 2019 Let’s Elope Stakes Field is down to 12 after the early withdrawal of #3 Music Bay (8). It shapes up as an open race with Fidelia leading betting to return to her previous winning form after a first-up fifth in the Cockram Stakes. My Pendant out wide in barrier 12 (into 11) still presents as the danger chasing a third win on the trot.

The Let’s Elope Stakes 2019 nominations are released by Racing Victoria the Monday of race week and will be available below.

The official 2019 Let’s Elope Stakes Nominations attracted 15 class mares including the Robbie Griffiths-trained Flemington specialist Fidelia who is undefeated at the track, Lindsay Park’s Randwick Guineas runner-up from the autumn Fundamentlist coming back in grade, and in-form Pins four-year-old My Pendant chasing a third win on the trot.

Originally a Listed race from 1987 to 2004, the Let’s Elope Stakes then elevated to Group Three status from 2005 to 2008 and in 2009 it finally reached Group Two status. Previously known as the Milady Stakes, the event’s fastest winning time was recorded in 2013 when Commanding Jewel won in a sharp 1:22.5. Commanding Jewel returned to take out the race again in 2014.

The Let’s Elope Stakes retains an important place in the Spring Racing Carnival as a reasonably accurate form indicator for punters in later Group 1 races, including in 2011 when the winner Pinker Pinker won the Cox Plate that October.