Brilliant juvenile Away Game is the early market mover in Robert Sangster Stakes 2020 betting for this weekend in Adelaide. 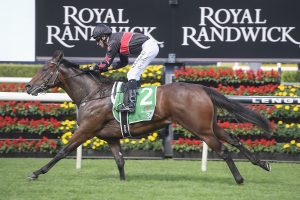 A star-studded field of fillies and mares face off in the Group 1 $400,000 Robert Sangster Stakes (1200m) at Morphettville on Saturday including the Ciaron Maher & David Eustace-trained Away Game.

The star young daughter of Snitzel has been the toughest two-year-old of the season winning four of her seven starts including the $2 million Magic Millions 2YO Classic at the Gold Coast.

She has twice been tested at elite level when fourth in the Group 1 Blue Diamond Stakes (1200m) beaten only 1.35 lengths in Melbourne and second in Sydney’s Group 1 Golden Slipper Stakes (1200m).

Her latest run saw her secure a Group 2 win in the wet at Randwick on April 11 with a barnstorming victory in the Percy Sykes Stakes (1200m).

The stable has decided to race on with her into the Robert Sangster Stakes with Away Game coming right back from 56kg to just 47kg in the weight-for-age feature.

With the light weight and ideal barrier four draw for jockey Dean Holland, Away Game is firming in the markets backed in from $6 to $4.50 in the Robert Sangster Stakes odds at Ladbrokes.com.au.

The danger out to stop the gun youngster from a winning finish to her prep is the $2.90 favourite in Robert Sangster Stakes betting, three-time Group 1 winner Sunlight.

Four-year-old Zoustar mare Sunlight is at the other end of her campaign racing second-up this weekend on the back of a resuming second to Black Caviar Lightning winner Gytrash in Morphettville’s Group 3 RN Irwin Stakes (1100m).

The Tony & Calvin McEvoy-trained top elect has work to do from her wide barrier 16 draw but is a formidable second-up performer (4:3-0-1) and has had two runs for two seconds at the track.

Success will see Sunlight secure her first victory since the Group 2 Gilgai Stakes (1200m) when defeating Santa Ana Lane at Flemington last October, and co-trainer Tony McEvoy is confident she can give Away Game a run for her money.

“I thought Sunlight was the toughest horse racing in Australia until you look at Away Game’s record,” McEvoy told RSN 927 this week.

“Wow. She’s extremely tough, she’s been racing since December last year and been travelling the length of Australia.

“But all that tells me is she can’t be getting better this far into her preparation, and she’s running into Sunlight at the peak of her powers second-up.

“It throws a new dynamic into the race, but it’s going to be a tough job for that two-year-old filly taking on these horses, I would’ve thought.”

The David Pfieffer-trained recently Group 1 The Galaxy winner I Am Excited ($9.50), backed in from double-figures, is the other best fancied of the female gallopers in this year’s Robert Sangster Stakes.