Mark Newnham’s underestimated colt Splintex was the race day market mover and did a brilliant job to hold off a fast finishing Group 1 winning filly in Flit to salute in the Group 2 Arrowfield 3YO Sprint results at Randwick. 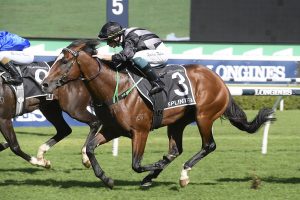 Market mover Splintex saluted in the 2020 Arrowfield 3YO Sprint on The Championships Day 2. Photo: Steve Hart.

A well-bred son of Snitzel, the punters could have Splintex as long as $26 earlier in the week when markets first opened on the $500,000 Arrowfield 3YO Sprint (1200m).

The up-and-comer was well supported on Day 2 of The Championships however firming into $9 pre-jump through Ladbrokes.com.au and it proved the right move to be on the money in the fifth race of the day.

Jockey Robbie Dolan continued his association on the Gosford Guineas third placegetter back in December, the colt coming off a big 3.3 length win at Rosehill from late February over 1100m on a Heavy (8).

He got conditions to suit again on Queen Elizabeth Stakes Day with Randwick a Heavy (8) and Splintex relished both the rain-affected track plus the inside alley that allowed him to go straight up into second on the fence as Human Nature led the field around.

Freshened-up off his last start victory, the youngster had been brought on for the Arrowfield Sprint with a Randwick 1050m trial on March 27 when he finished fourth behind subsequent TJ Smith Stakes champion Nature Strip.

Further franking the form out of that hit-out, Splintex travelled beautifully throughout given a peach of a ride by Dolan who was able to pick up the lead once on the straight.

Splintex had front running as they charged towards the line sitting just ahead of Peter & Paul Snowden’s Group 1 placed filly Anaheed.

It was another filly that presented as the big danger late however with Godolphin’s Thousand Guineas winning daughter of Medaglia D’Oro, Flit, looking to atone for her luckless 14th last start in Caulfield’s $5 million The All-Star Mile (1600m).

Back against her own age in Sydney over 1200m in a smaller field, Flit improved from a midfield position starting to pick up at the 300m before taking things to another level inside the final furlong.

Flit surged on the far side forcing a photo finish in the Arrowfield, but it was Splintex on the outside who got there by a nose, while Anaheed ran on well for third.

“That means a lot to us,” winning hoop Dolan said after the race.

“I have ridden him since he was a very young horse and I have always believed in him along the way. It’s just unbelievable to ride him in a big race like this today, and then to win it is a fairy tale.

“Flit is very long. That is one thing I noticed just after the line, I thought gee she is longer than I am, but thankfully my fella just stuck his nose out in the right spot. I’m over the moon – delighted.”

Proving himself today, Splintex notably improved his potential future value at stud with the Group 2 victory, his first over the 1200m, showing great fight late to hold on.

“That was terrific,” Newnham told the media post-win.

“He hadn’t been and won at the 1200m yet so I had my heart in my mouth the last few strides, but he’s just a really good genuine horse and I think he has been a bit underestimated.

“His fours win before today had all come in Saturday company, we tested him a little bit stronger in Melbourne and it all went wrong.

“They had a lot of rain on the day, but we freshened him up and looked at this race and now he is a Group 2 winner and he’s still a colt.”