Shane Nichols’ $1.8 million earner Streets Of Avalon is firming favourite in P.B. Lawrence Stakes 2021 betting for the horse’s second-up run into the spring this weekend in Melbourne. 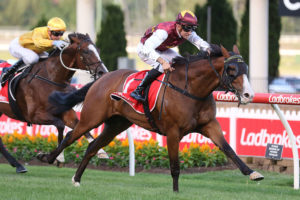 Sitting top of the latest P.B. Lawrence Stakes odds online at $3.10 through Ladbrokes.com.au is Magnus seven-year-old Streets Of Avalon to jump from barrier eight with his regular rider Zac Spain in the saddle.

During the autumn the galloper enjoyed a half-length win at the track and distance taking out the Group 1 C.F. Orr Stakes (1400m) and the money for Saturday’s Group 2 suggests he can return to winning form.

He presents fitter for the run and better suited to 1400m making him the deserving favourite and horse to beat in the P.B. Lawrence.

Punters will be hoping history doesn’t repeat itself however after Streets Of Avalon ran second in last year’s Bletchingly Stakes before a mid-field seventh in the P.B. Lawrence Stakes results of 2020 behind Savatiano.

The hoop’s previous victories in the event came aboard: Le Zagaletta (2001), the great WFA star Whobegotyou (2011) and most recently Miss Rose De Lago (2016) for O’Brien.

From the same stable, Sebring five-year-old Superstorm is after his first win at the Caulfield track after four previous attempts (4:0-1-1).

The progressive runner was third in last year’s Group 1 Toorak Handicap (1600m), but hasn’t raced since a sixth to Colette at Rosehill last October in the $7.5 million Golden Eagle (1500m) run in the mud.

With the fitness edge on the other hand is Streets Of Avalon’s last start conqueror, Bletchingly Stakes winner Sansom out to do the double for the first time since Shoot Out (2010).

Sansom is out to complete the Bletchingly Stakes – PB Lawrence Stakes double for the first time since Shoot Out in 2010 Bet now with Ladbrokes.com.au

The Kiwi-bred Charm Spirit gelding was brave first-up to defeat the Group 1 winner, but will need to be good to repeat the feat over 1400m in the rematch.

In a tight market a further three P.B. Lawrence Stakes horses are also under $10 for the win including the Godolphin-raced market mover Best Of Days ($8 into $6.50).

Top female jockey Jamie Kah partners the James Cummings-trained eight-year-old from a favourable barrier two draw, the veteran having his 40th career start in the event.

Runner-up behind Homesman in the Group 1 Australian Cup (2000m) back in March before a failed Doncaster Mile run in Sydney (15th), Best Of Days races for the first time since and word is he’s ready to atone with a big run fresh back in Melbourne.

The P.B. Lawrence Stakes is set to run as Caulfield Race 8 at 4:35pm (AEST) on Saturday and full markets can be found here courtesy of Ladbrokes.com.au.