Chris Waller’s superstar sprinter Nature Strip was back to his brilliant best, the champion seven-year-old turning up on Day 1 of The Championships at Royal Randwick to win his third TJ Smith Stakes by a runaway margin. 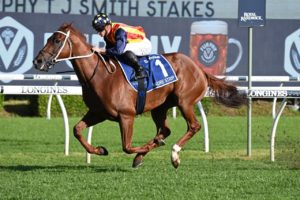 Nature Strip was brilliant saluting for the punters in the 2022 TJ Smith Stakes results for the third straight year. Photo: Steve Hart.

After being beaten with excuses in his two lead-up runs this prep, the spring’s $15 million The Everest hero relished the step-up to the six furlongs at Randwick third-up and fit given a peach of a ride by James McDonald.

“He’s got a cult following. Whether they like him or hate him he’s got a following and most people really appreciate the horse for what he is. He’s very special, he puts them under a bit of pressure,” Waller told the media after the race.

“He’s a better horse in the autumn and he’s a good horse over 1200m. If you want to go with him, you’re in trouble.

“We probably just rode him a bit cheap last start, he was coming off a really tough first-up run. As we’ve learnt four weeks after a run before is probably when he’s at his optimum, so the first-up run against Home Affairs took a bit out of him and we’ve had enough time to bounce out of it.

“I thought Nash (Rawiller – rider of second horse Eduardo) was a bit cheeky taking a sit behind us, trying to get into our slipstream. It looked good, he would’ve been a hero if it come off, but he didn’t have the motor we had.”

J Mac took control of the TJ early on, rolling forward on Nature Strip from the outside gate to sit second on the outside of regular sparring partner Eduardo as the two big wigs in the race settled one-two the early stages.

Nature Strip surged to take up a clear lead at the 600m forcing the Joe Pride-trained Eduardo to take the sit, the favourite extending his lead on the home straight with the top two well clear from the rest.

At the 250m, evergreen eight-year-old Eduardo was trying his heart out, but nothing was catching TJ specialist Nature Strip who was unstoppable racing off to win by over three lengths.

“It’s just unbelievable isn’t it. Three of them. He’s got The Everest, he’s won everything in Australia, he’s just an incredible incredible horse. This one I don’t know, it feels just surreal. I just sort of feel numb because the horse is just a marvel. What he’s achieved in his career, he’s just a freak,” McDonald said of Nature Strip.

“The barrier allowed us to do what we wanted to do, it was no concern whatsoever, if not it was a blessing. He popped away the cleanest he’s ever popped away, he was just on song.

“You could see his demeanour when he walked around the barriers before he even loads into the gates. He’s on song, so my job is just to hang onto the neck strap and just keep going through my gears. When he pricked the ears at the 400 I knew it would take a good one to run him down.

“He gives me goose-bumps every time a grand final comes around. I know he’s tuned up to the minute, he does everything so well at home. Chris (Waller) has been so happy with him and when he sets one for a race there’s none better.

“It gives you so much confidence, the barrier allowed us to get into a nice rhythm the whole way and when he pricked his ears at the 400, I was like “What’s going on here?”. A real goose-bump feeling winning three TJ’s on him.”

The James Cummings-trained three-year-old Paulele got up into third to round out the TJ Smith Stakes trifecta.

The world now looks Nature Strip’s for the taking with a likely international bid at England’s Royal Ascot following in the footsteps of the mighty mare Black Caviar, before a return to defend his The Everest title in the spring.

“I would say so, it will be up to the owners to work out where they want him to go. I’m sure the main aim is to have him back here for The Everest and if we can shoot over and see our friends at Royal Ascot it would be pretty special,” Waller confirmed.

“Everybody respects Australian racing and especially our sprinters and middle-distance horses. It would be great to take horses like him and Home Affairs over there and put that flag up pretty high.”

He sits top of the all-in 2022 The Everest odds for the world’s richest turf race on October 15 at $5 through Ladbrokes.com.au – full markets available here.