Trainer Gary Portelli has won the world’s richest race for two-year-olds for the second time with another very nice filly in Fireburn who recovered after mid-race interference to storm home late in a phenomenal 2022 Golden Slipper result. 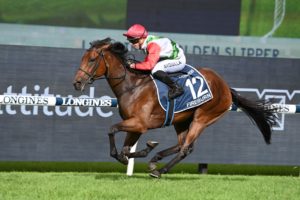 Adding to his triumph in 2017 with She Will Reign, Portelli collected his second Slipper trophy on Saturday thanks to an incredible performance by his ultra-consistent Rebel Dane filly Fireburn in the $5 million feature at Rosehill Gardens.

“You could see her building and going through her revs, what a finish. Unbelievable. Rebel Dane, who’d have thought he would throw a Golden Slipper winner?” Portelli said post-win.

“Congratulations to (managing owner) Louis Mihalyka and the team. I am forever thankful to them for giving me Rebel Dane to start with and then a daughter of his and it just continued the great story.”

She was three-from-four heading into the six-furlong showdown having been kept fresh since her first-up win in the Group 2 Sweet Embrace Stakes (1200m) run on a Heavy (10) at Randwick on February 26.

The form of that race was franked with the runner-up She’s Extreme going on to win the Magic Night Stakes last weekend, while Fireburn proved her class in the grand final.

After getting knocked sideways and shuffled back at the 700m when there was a scrimmage, jockey Brenton Avdulla somehow found a way to weave a passage through the Golden Slipper field and present at the right time on the straight.

“He has gone to a new level,” Portelli said of Avdulla.

“Sometimes you have an injury and he’s had a situation where he has probably looked at his career and he’s potentially had his lifestyle taken away from him and they come back and realise what they’ve got.

“It’s the greatest sport. It’s the highs and lows, you’ve got to put up with the lows and hope the highs come back and here he has come back from a serious injury and won two Group Ones in a month, so it just goes to show, don’t give up.”

Kacy Fogden’s previously undefeated Snitzel colt Best Of Bordeaux led throughout and was still in front 300m out with the favourite, returning Magic Millions Classic winner Coolangatta, called upon at the 250m to give chase.

All eyes quickly went to Fireburn ($12) however who got off the fence to charge home in a massive late run going on to defeat the brave Silver Slipper winner Best Of Bordeaux ($11), who held for second after doing all the work up front, by two and a half-lengths.

Good at a big price to round out the first four was Anthony & Sam Freedman’s Blue Diamond Stakes hero Daumier ($21).

“No it’s crazy. I said to the Mrs I wouldn’t cry after the first week but it’s very special obviously,” winning jockey Avdulla said.

“It’s hard to get rides any time of the year but when you’re off a setback and trying to get the weight under control.

“Gary gave me plenty of faith with his support all my career and him and his connections put me on her. She gave me a great feel Tuesday.

“To come out and win a Slipper again, I thought it was going to be hard to get one but now I’ve got two in three years.”

Portelli is now looking forward to a stellar spring to come with Fireburn who he is tipping to return even stronger as a three-year-old next prep.

“She has been the biggest improver in the stable that I’ve ever seen. I said this week, she has peaked so well. This morning, I had to go and work her. I was going to give her an easy day but she was too fresh, so I had to go and give her some work and she has turned up here and smashed them,” he said.

“She is the best two-year-old in Australia right now and I’ve got no doubt she will be the best three-year-old.”