Gary Portelli will saddle-up one of the most consistent young hopefuls in the upcoming Golden Slipper following the strong win by his proven colt Sejardan in the 2022 Todman Stakes in the wet on Randwick Guineas Day. 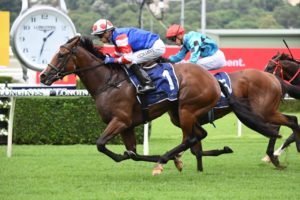 Sejardan is clear second favourite for the $5 million Golden Slipper following a win in the 2022 Todman Stakes at Randwick. Photo: Steve Hart.

Portelli won the world’s richest race for two-year-olds back in 2017 with his filly She Will Reign and is set to have two runners in the big one on March 19 at Rosehill Gardens with his Sweet Embrace Stakes winner Fireburn and now Sejardan.

The well-bred son of Sebring has lived up to his pedigree so far, winning the Group 3 Breeders Plate (1000m) on debut at Randwick last October before saluting in Rosehill’s $1 million Golden Gift (1100m) next-up on firm going.

His resuming run when third to Xtravagant Star on February 5 in the $2 million Inglis Millennium (1100m) was forgivable and he was quick to atone with a powerful victory in today’s Group 2 Todman Stakes (1100m) run on a Heavy (10).

Farnan (2020), Vancouver (2015) and Pierro (2012) have all recently completed the Todman – Slipper double that Sejardan is out to achieve this autumn.

He gave them a start and then in the end gave them a beating with jockey Jason Collett settling the eventual Todman Stakes winner in a nice trailing position off the speed.

There was a genuine battle for the lead happening up front with the Peter & Paul Snowden-trained Calgary Stampede mustering the speed up on the fence to sit just ahead of last start Canterbury winner Psychiatrist.

Calgary Stampede was still in front coming up the rise, but all eyes quickly went to the challengers from the back with the likes of Shalatin and Boyfriend closing the gap.

Inside the final furlong Collett pressed the button on Sejardan who hit top gear at the 100m, racing up to take the lead from Gerald Ryan & Sterling Alexiou’s Snitzel colt Boyfriend and win by a long neck.

“I’ve loved him from day dot. He is a raw type with a good head on him and he makes the job easy,” the winning hoop said post-race.

“It was a good effort today. He probably wasn’t overly keen on that part of the track to be there and he had to do a little bit of work to get into the race but he toughed it out late.

“He sweated up beforehand but Gary said to me ‘it’s Grand Finals in two weeks’ so I would like to think there is still a bit more improvement there and am looking forward to it.”

The Joe Pride-trained Shalatin rounded out the Todman Stakes trifecta in third.

There is now a fortnight to go before the season’s top juvenile will be crowned in the $5 million Group 1 Golden Slipper Stakes (1200m) and outside of the Maher/Eustace filly Coolangatta, Sejardan looks the other key chance.

“It’s a fantastic race to be holding at that time of the year as it’s worked out. I’ve got the right horse,” Portelli said after the Todman victory.

“It feels a bit like déjà vu with She Will Reign. When you’ve got one of the best two-year-olds, you can do different things with those horses.

“The bad horses, or the average horses, can’t cope with five weeks between runs and come out and win a $1 million race, they’re looking for a paddock after a bit of pressure. This bloke, I don’t know, he’s just different. If I choose the race, I have him ready for it, he races well.”

A wet or dry track won’t matter as he has ticked both boxes and the step-up to six furlongs looks ideal.

“It’s going to be the longest two weeks in history. It’s funny, I was just watching coming to the corner, I thought ‘you’ve got a bit of work to do here’ and that track was really soft and he was ploughing,” Portelli said.

“But he’s just got the iceman on (Jason Collett). He just waits until the horse starts to regain itself and picks up and every stride he felt the horse start to lengthen and he asked for a bit more.

“He (Collett) never panics and he knows where the winning post is, this horse. Look out in two weeks time.”

“He (Sejardan) could stand here and do this interview with us, he is such an intelligent horse, he is the coolest customer for a colt I have come across. He eats, he drinks, he works. He doesn’t go out to show off or anything like that, he just goes out and does his work and he turns up on race day. It’s all ahead of him. He is just a lovely horse.”

The fillies in the Reisling one run earlier ran slightly quicker time in 1:13.41 with Seven Veils winning for trainer Mark Newnham, the boys getting the job done in the Todman in 1:13.99.

The latest all-in Golden Slipper Stakes odds online at Ladbrokes.com.au are led by Coolangatta ($6) with Sejardan now hot on her heels at $7 and are available in full here.