Seven Veils has raced her way into the $5 million Group 1 Golden Slipper Stakes (1200m) with an impressive win in the wet second-up for Mark Newnham and Kerrin McEvoy in the 2022 Reisling Stakes at Royal Randwick. 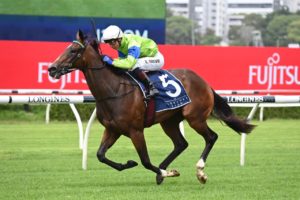 Seven Veils is into the 2022 Golden Slipper field following an impressive win in the Reisling Stakes on a Heavy track. Photo: Steve Hart.

Franking the form from her debut at Kensington when runner-up to Conqueror on a Good (4) on February 16, the progressive Shalaa filly was too good for her rivals on a Heavy (10) track in the Group 2 $300,000 Reisling Stakes (1200m).

All but one of the Golden Slipper winners since 2011 raced in either the Reisling Stakes or Todman Stakes ahead of their victories, with Seven Veils now out to do the Reisling – Slipper double for the first time since Estijaab (2018).

McEvoy went to the front after settling in the Reisling to lead the field around in the mud, while the Peter & Paul Snowden-trained favourite Russian Conquest drifted back to second last.

With the Ciaron Maher & David Eustace-trained sister to Loving Gaby, Greece, in second the other danger looked to be the Godolphin-raced Qjai backing-up from a fourth in the Silver Slipper and well positioned third the fence.

Seven Veils held her lead around the turn on the rain-soaked course, with Qjai moving up from her gun trailing position coming off the fence to challenge 300m out from the line presenting at the right time but in the end not good enough to run down the impressive winner.

Strong from the front, Seven Veils held her ground giving a beautiful kick to fend them off for a strong one and three-quarter length victory despite wandering late.

“She did land in front quite easy,” McEvoy said after the race.

“It is hard work with them, hopefully we don’t get any rain during the day because it is Soft enough or Heavy enough but you don’t need to be able heavy ground or rain affected ground to be featuring today.

“She got into a nice rhythm in front, handled the ground and she gave a nice little kick when I asked her. She clocked off a little bit late when she spotted the winning post. There is improvement to come, she is a nice, leggy filly.

“Whether she is up to a Slipper remains to be seen but she handles that ground.

“If I owned her, I would be having a crack.”

Getting up into second was the Hawkes Racing-trained Dashing Legend who came with a good late run to go one better than her third in the same Kensington event that produced the Reisling winner, while Qjai snared third in a photo over the beaten favourite Russian Conquest.

Having taken his time with Seven Veils, Newnham is now confident the time is right for the filly to make her class known just in time for the Slipper.

“She does now that she’s qualified,” he told the media post-win.

“She has always had above-average ability. She had a couple of early trials and pulled up shin sore after her second one, but she has come back in really good shape.

“She made a few mistakes on debut and it just cost her the win. It was our plan to come here if she had won that midweek maiden and I was buoyed by the fact the form out of the race has been quite strong and she has shown good natural improvement from her first-up run.

“Kerrin (McEvoy) took control of the race. All I’d said to him was don’t hunt her forward, don’t drag her back, just let her be comfortable. She looked comfortable in front, and she was really strong to the line.”

Proven on both firm and wet ground, Newnham said he would no longer need to keep an eye on the weather or track conditions ahead of Golden Slipper Day 2022.

“It doesn’t now. It was the one question I had prior to the race and she has ticked that box. Sydney autumns, they can remain pretty wet at times but look, she is a nice filly,” he said.

Updated all-in Golden Slipper betting markets at Ladbrokes.com.au on Seven Veils have her at a generous $26 and are available in full here.