She has eased out slightly in Magic Millions 2YO Classic 2022 betting at the Gold Coast this weekend but the undefeated Ciaron Maher & David Eustace-trained Coolangatta remains the class filly in the $2 million feature. 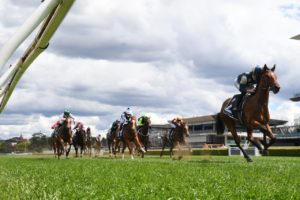 She chases her third win from as many starts and comes into the event as a two-time Group 3 winner.

Ace Sydney-based hoop James McDonald continues associations this Saturday in the Magic Millions 2YO Classic from a just worse than mid-field barrier.

Master trainers of juveniles Maher & Eustace enjoyed success in this event two years ago with class filly Away Game (2020) – who contests this weekend’s $1 million Magic Millions Snippets (1200m) – and have the filly to beat again in 2022.

Shaquero (2021) last summer was the first colt to beat the fillies in this race since Capitalist in 2016 and the money suggests Coolangatta can return the girls to winning form.

The latest Magic Millions 2YO Classic odds at Ladbrokes.com.au have her at $2.10 out from $2 and just one other runner is under $10 to challenge with fellow filly Russian Conquest out from $6.50 to $7.

Peter & Paul Snowden saddle-up the “danger” with their daughter of Russian Revolution also two-from-two ahead of the $2M showdown.

Kerrin McEvoy partners Russian Conquest, last seen winning a 1100m 2Yos race on December 26 at Randwick by over three lengths, from a gun gate four draw having previously ridden the Godolphin-raced Exhilarates to victory in the race in 2019.

The only other chance the bookies are giving any merit to is the fellow Snowden-trained Hellbent filly Miss Hellfire, a winner here last weekend over 1100m after her Wyong Magic Millions 2YO Classic second in mid-December, backed in from $11 to $10.

Other juveniles to have had a bit of support from the punters for an upset include Annable Neasham’s Wyong Magic Millions 2YO Classic winner Soaring Ambition ($15 into $14), Danny O’Brien’s widely-drawn colt Stupendo ($20 into $19) and the Trent Busuttin & Natalie Young-trained MM 2YO Classic winner at Ballarat last November Cusak ($31 into $26) racing first-up off back-to-back winning Gold Coast trials.