Nature Strip had been beaten as an odds-on favourite five times previously but not at Flemington on Mackinnon Stakes Day this spring, Chris Waller’s star sprinter dominating the 2021 Darley Sprint Classic results at a short price with a big three length win over Swats That. 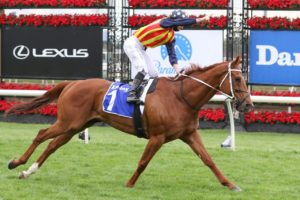 All the money for this year’s Group 1 $2 million Darley Sprint Classic (1200m) was on Waller’s $15 million The Everest champion Nature Strip and he never looked in doubt, jockey James McDonald continuing his lovely association with the horse and his outstanding Melbourne Cup Carnival in 2021.

Following their victory in the Melbourne Cup with Verry Elleegant at the track on Tuesday, Waller and McDonald combined again with Nature Strip securing his second Darley Classic victory.

“He’s a very special horse I think longevity is the key with these good horses,” Waller, now a 130-times Group 1 winning trainer, said.

“It was good to bring him down here today it’s a long prep for these horses and to hold them up I think is a credit to my team.”

The son of Nicconi won the 2019 edition of the sprint feature on the back of his The Everest fourth to stablemate Yes Yes Yes and was runner-up to Bivouac last spring after a seventh in the world’s richest turf race.

This season, a now matured Nature Strip finally secured The Everest win at his third attempt and he franked that form heading south to one of his pet tracks with an all-too-easy performance in the Darley Classic.

“So much fun! Obviously, we’ve experienced the straight twice on two really superstar horses and they’ve both delivered in style.

“Nature Strip was nothing short of brilliant today. He’s had a great campaign this prep and he’s just a marvellous horse.”

Celebrating his seventh Group 1 success, the champion also gave Waller and McDonald their third overall win in the event following their earlier success with Delectation back in 2015.

McDonald went straight to the front down the middle of the track after briefly looking like he would veer to the flat-side rail to join Streets Of Avalon who was the only horse that went to that side in the run.

Nature Strip took up the lead ahead of stablemate September Run and those two dashed clear at the 300m.

Inside the final furlong however it was all Nature Strip, the $15 million earner exploding away to easily account for his rivals.

Following Nature Strip and the distant Leon & Troy Corstens-trained Swats That over the line to complete the Darley Sprint Classic trifecta was the ultra-consistent mare Bella Nipotina for Ciaron Maher & David Eustace.

Nature Strip could now be earmarked for a potential trip to England for the 2022 Royal Ascot Carnival.

“Just go through the basics, give him a holiday which is what he deserves and then find some nice races and maybe overseas if the owners are keen,” Waller said.

“We dare note complain. Racing’s continued and we should all be very proud here in Australia.”