The poor form of favourites in the ‘race that stops a nation’ continued for the 161st edition with Incentivise failing to salute for the punters in the 2021 Melbourne Cup results as Chris Waller’s darling of the turf Verry Elleegant dominated with a four length win. 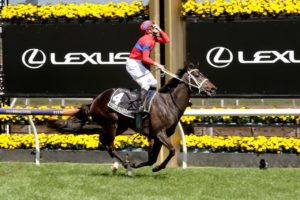 Getting to the front 200m out from the line in the world’s richest handicap, the champion daughter of Zed became a 10-time Group 1 champion improving on her very good seventh to Twilight Payment in last year’s Group 1 $8 million Lexus Melbourne Cup (3200m).

Waller celebrated his first Melbourne Cup victory with James McDonald guiding Verry Elleegant, just the 12th individual mare to salute in the great race and the first since the historic three-peat of Makybe Diva (2003-5), to a bullish victory over the beaten short-priced favourite.

Makybe Diva won her last in 2005 with 58kg, Verry Elleegant only carrying a kilo less than that in a supreme effort proving once again not just her class but her versatility.

In a master training performance by Waller, who is now a 129-times Group 1 winning horseman although was not track-side to witness the magic, he got the mare to win over the two-miles in the Melbourne Cup off a lead-up third over 2040m in the Cox Plate.

James McDonald was still reduced to tears 20 minutes after the official Melbourne Cup 2021 result, the jockey so grateful and emotional having ridden Verry Elleegant for the 20th time for 10 wins.

“To pilot horses like Verry Elleegant each and every carnival is just a huge privilege,” Cummings, who picked up the eleventh-hour ride after his original mount Away He Goes was withdrawn due to injury, told Racing.com.

“It obviously worked out really well for us today.

“Today we were lucky enough to win a Melbourne Cup.

“You can see how far she’s come. She relaxed over 3200m and showed her dazzling turn of foot.

“She was ready for it.

“I just didn’t think this ever would have happened.

“But I was very confident in the mare today.”

Going down in history as one of the best mares in the world, Verry Elleegant carried a hefty 57kg but won like she was one of the 50kg light-weights in the field.

It was definitely a matter of class rising to the top as the three horses carrying 57kg running the Melbourne Cup 2021 trifecta.

Floating Artist was the best of the four for Ciaron Maher & David Eustace on just 50kg, the ultra-consistent galloper giving apprentice Teodore Nugent a huge thrill running fourth in the Melbourne Cup.

Peter Moody’s Caulfield Cup champion Incentivise had every chance settled beautifully one of the fence in second after crossing from the wide gate as Persan led them around in the Cup.

McDonald meanwhile had Verry Elleegant well and truly off the rails around mid-field throughout before making his move as the approached the turn for home in a three-wide position trailing.

Moving around the outside getting closer was Craig Williams on Spanish Mission, McDonald following him through in a masterful steer as Verry Elleegant began to go through her gears.

The punters started the cheer prematurely as Incentivise, chasing 10 straight wins, hit the front at the top of the straight.

But once McDonald hit the button on Verry Elleegant, the rest of the field looked like they were standing still as the mighty mare flew past them extending her lead to over three lengths as she hit the line and raced into the history books.

“I tell you, no word of l lie, the thought went through my mind at the 500 (metres), when I saw Incentivise getting shoved along, I knew he was going to fight but I thought there wasn’t a horse that was going to come from behind me, it was only a matter of catching them,” McDonald said.

Incentivise did not drop away, continuing to stick on and was brave in defeat, but just got outstayed by a better horse with Verry Elleegant answering the critics that suggested she could not run the two miles.

“I really wish Chris could have been here today he certain deserves this one,” Waller’s stable representative Jo Taylor said while holding onto the 2021 Melbourne Cup trophy.

“Her performance in the Cox Plate was fantastic. She was just really tough and we always thought Moonee Valley, just that final turn could be a bit of a sticky spot for her.

“The other two horses (State Of Rest and Anamoe) are very good horses and just got the splint on her, but she kept finding all the way to the line.

“We gave her the time she needed and allowed her to tell us what she wanted to do.

“She had a tough task ahead of her today. 57 kilos is certainly a lot to carry and that combine that with the barrier she had a mountain to climb, but she got in a really good position.

“When we were turning for home, we wanted to get excited, but didn’t want to go the early crow.

“She’s certainly a beast of her own and full credit to Chris and the entire team across the whole country.”

Verry Elleegant also made history as the first horse to win the Melbourne Cup from barrier 18 since gates were officially introduced.