The 2021 Melbourne Cup field is starting to take shape as we move closer to confirming the 24 horses set to contest the 161st edition of the world’s richest handicap next Tuesday.

As it stands there are 29 stayers still officially entered for the Group 1 $8 million Lexus Melbourne Cup (3200m).

The time-honoured two-mile classic has a capacity of 24 starters and not since 1997 has there been fewer than 24 final Melbourne Cup acceptors.

The 2021 Lexus Hotham Stakes field features nine runners and four of those are Melbourne Cup nominated. 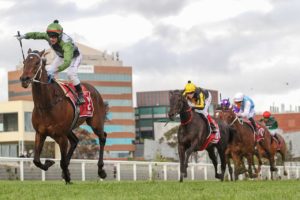 The favourite Great House from the Waller stable has recently moved up into No. 24 on the Melbourne Cup ballot and could be scratched from the Lexus on Saturday morning.

The other three Lexus Hotham Stakes runners that sit outside the prized Top 24 on the latest order of entry are: Emissary, King’s Charisma and Mankayan who are all equal 26th and needing to win to be in.

Right on the cusp of a run sitting 25th on the order of entry and a firmer in betting into $17 is the Ciaron Maher & David Eustace-trained Nathaniel six-year-old Floating Artist.

This horse has hit a lovely vein of form at the right time running third a quarter-length off Duais in the Group 3 Coongy Cup (2000m) on Thousand Guineas Day before a second in last weekend’s beaten a nostril flare in the Group 2 Moonee Valley Gold Cup (2500m).

Looks like he’ll get the two miles and with just 50kg in the Melbourne Cup weights will be flying if he can get in.

Of course, plenty relies on Saturday morning’s third vet examination of easing international visitor Spanish Mission who is under a serious cloud of doubt.

The Andrew Balding-trained UK raider was as short as $5 sitting second in the Melbourne Cup betting markets at Ladbrokes.com.au before failing two recent Racing Victoria checks.

The most recent of those was on Friday when, despite swelling coming down in his leg, there were signs of mild cellulitis.

Spanish Mission has eased right out to double figures ($10) now and his fate will be known on Saturday morning before Victoria Derby Day racing gets underway.

Peter Moody’s Caulfield Cup winner Incentivise is the most talked about horse in the country right now and heads the Melbourne Cup order of entry after winning the Group 1 Caulfield Cup (2400m) last start by 3.5 lengths.

Current all-in Melbourne Cup odds have the galloper at $2.30 and firming, the shortest-priced Melbourne Cup favourite since Phar Lap ($1.73 in 1930) and Brett Prebble has been confirmed to ride.

The other ballot-exempt horse heading towards the Melbourne Cup this year is the Ciaron Maher & David Eustace-trained Group 3 The Bart Cummings winner Grand Promenade getting in on just 52kg even with his 1kg penalty.

Almandin (2016) is the last horse to complete The Bart Cummings – Melbourne Cup double.

Three-time Melbourne Cup winning jockey Kerrin McEvoy partnered Almandin to victory in the ‘race that stops a nation’ and has also been locked in to attempt the same feat on Grand Promenade this season.

Jye McNeil reunites with the Irish raider, who races as a nine-year-old in Australia, and the money is coming for a successful title defence by the evergreen veteran who is into $9 to become the oldest Melbourne Cup winner in history.

Click here for the latest Melbourne Cup 2021 betting odds courtesy of Ladbrokes.com.au ahead of the official final field announcement on Saturday afternoon.