Second favourite for next Tuesday’s Melbourne Cup 2021, the Andrew Balding-trained UK raider Spanish Mission is under a serious injury cloud ahead of the ‘race that stops a nation’. 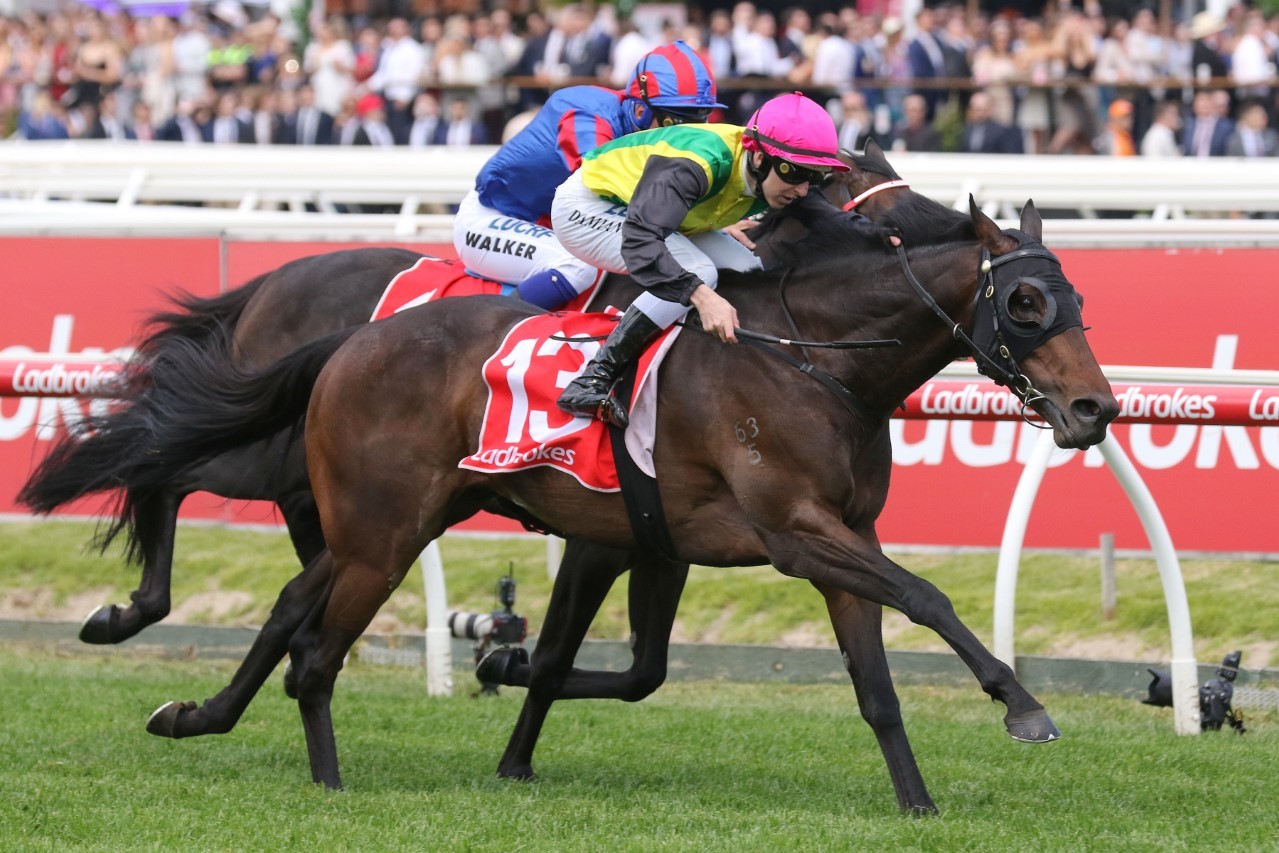 The Chosen One has been passed fit to line-up in next week’s 2021 Melbourne Cup field. Photo: Ultimate Racing Photos.

While fellow hopefuls The Chosen One and Delphi were on Friday passed fit to line-up in this year’s Group 1 $8 million Lexus Melbourne Cup (3200m), Spanish Mission will need to be re-vetted on Saturday morning.

There could be just one northern hemisphere-trained horse in this year’s Melbourne Cup field in the form of defending champion Twilight Payment from the Irish stables of Joseph O’Brien who is on the hunt for his third ‘Loving Trophy’.

Earlier in the week jockey James McDonald lost his confirmed Melbourne Cup ride with Away He Goes ruled out due to a tendon injury.

Racing Victoria have been ultra-diligent in regards to vetting all Melbourne Cup contenders this year making increased attempts to avoid any more catastrophic Melbourne Cup deaths.

Spanish Mission was examined a second time on Friday for swelling in his right foreleg from earlier in the week.

The swelling was found to have resolved, but with veterinarians still detecting heat in the area likely due to mild cellulitis a third check has been ordered before Saturday afternoon’s Melbourne Cup final acceptances close at 4:30pm (AEDT).

In the name of the horse’s wellbeing, the stable opted to send Spanish Mission to be examined by specialists at the U-Vet Equine Centre immediately after his second check.

With nothing else serious found, the Noble Mission entire has returned to his temporary home at the Werribee International Horse Centre.

Spanish Mission has eased out in all-in Melbourne Cup odds at Ladbrokes.com.au from $6 to $9 due to the concerns around his fitness.

Craig Williams is currently booked to ride Spanish Mission chasing his second win in the race after victory aboard the Danny O’Brien-trained Vow And Declare two years ago.

The Murray Baker & Andrew Forsman-trained New Zealand galloper The Chosen One meanwhile will take his place in the Melbourne Cup field for the first time after passing his re-examination.

Five lengths back 17th to Vow And Declare in 2019 before an improved fourth in last year’s Melbourne Cup results on the back of a Caulfield Cup third to Verry Elleegant, the now six-year-old son of Savabeel is a 50/1 outsider for his third shot at the title.

Damian Lane has been confirmed to ride The Chosen One on Tuesday having been aboard for the horse’s four latest starts including the disappointing Caulfield Cup 14th.

The third horse that underwent a second examination on Friday after earlier fitness concerns was the Anthony & Sam Freedman-trained Delphi, the Galileo five-year-old also now set to take his spot in the world’s richest handicap next week.

Delphi won the Group 2 Herbert Power Stakes (2400m) defeating The Chosen One by a length two starts back before failing to fire from barrier 17 of 18 and finishing 13th in the Caulfield Cup.

The entire, to be ridden by Damien Oliver, is at current Melbourne Cup odds of $34 looking unlikely to turn the tables on Peter Moody’s brilliant 3.5 length Caulfield Cup winner Incentivise.

Looking for an incredible ninth straight win and fourth at elite level this campaign for Moody, former Queenslander Incentivise is into $2.40 in Melbourne Cup markets to become the 12th Spring Cups double champion.

Racing Victoria vets also examined Future Score, She’s Ideel, Fun Fact and Saturday’s Derby runner Forgot You for the first time and all were found suitable to run should they make the top 24 and accept.