The time-honoured Group 3 $400,000 Bendigo Cup (2400m) takes place on Wednesday in Victoria with a number of the final acceptors still officially entered for the 2021 Melbourne Cup. 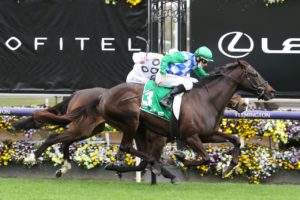 Toorandin is one of the horses chasing a Melbourne Cup start via Wednesday’s 2021 Bendigo Cup. Photo: Ultimate Racing Photos.

Four of those will get a chance to sneak inside the Top 24 on the Melbourne Cup order of entry via a win in the Bendigo Cup with Mosh Music (25th), Amade (29th), Tooradin (=30th) and Constantinople (=30th) yet to secure a run in the ‘race that stops a nation’.

Of those, the best in Bendigo Cup betting at Ladbrokes.com.au is Tooradin who is the current $4.50 second elect in the markets.

Tooradin was good winning races at Caulfield (2400m) and Flemington (2500m) recently before he looked outclassed running seventh to Delphi in the Group 2 Herbert Power Stakes on October 9.

He lines-up against an easier class of rivals here and presents as a genuine winning hope.

The Bendigo Cup odds are firmly led by Tooradin’s stablemate Smokin’ Romans at $3.20 jumping from gate two with Jye McNeil in the saddle.

The classy chestnut enjoyed a hat-trick of recent wins before losing few admirers when a length back second over 2400m at Caulfield on Thousand Guineas Day with 61kg.

He drops notably in weight to just 54kg in the Bendigo Cup field and looks a big chance to end the Melbourne Cup dreams of the four Cup hopefuls in the mix.

In an open edition of the Bendigo Cup the narrow third favourite is Phillip Stokes’ 58kg top weight Amade ($4.80) coming off a fourth to now confirmed Melbourne Cup contender Tralee Rose in the Group 3 Geelong Cup (2400m) on October 20.

The Archie Alexander-trained Moshe mare Mosh Music ($12) meanwhile is right on the cusp of a Melbourne Cup start sitting 25th on the ballot.

She needs to improve on her recent string of unplaced runs including a seventh to Nonconformist in the Group 3 Naturalism Stakes and eighth to Grand Promenade in the Group 3 The Bart Cummings.

Drawn the rails on Wednesday, recent Terang Cup winner Wentwood coming off a Group 3 Coongy Cup second is the other single-figure Bendigo Cup hope at $7 who is not eyeing a Melbourne Cup run.

The 2021 Bendigo Cup is set to run as Race 7 at 4:00pm (AEDT) on Wednesday with the latest markets available here thanks to Ladbrokes.com.au.