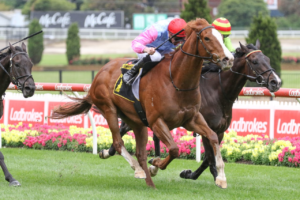 Julius and his fiancé Cassie lease a majority share of the five-year-old Magnus gelding Just Folk who held them all at bay for a gutsy win up in grade in the Group 2 $300,000 Crystal Mile (1600m) thanks to a wonderfully executed ride by John Allen.

“Cassie, my fiancé, and myself lease a fare majority of him off my grandparents and to have him here doing this for us is massive.

“A Group winner in my grandparents’ colours on Cox Plate Day is huge.

“His uncle, Tears I Cry, I strapped him to run third in this race many moons ago so this family’s been terrific for ours.”

The progressive chestnut came off a string of good runs around Victoria including a Listed second at Flemington on October 2 behind Justacanta and a last start fifth to Mr Brightside in the Listed Seymour Cup (1600m) just eight days after that.

Julius placed the horse to perfection in a great training performance and took advantage of a small Crystal Mile field lacking a bit of class this Cox Plate Carnival.

“We came thinking it might be our chance,” Julius said.

“It’s not the most regal of Crystal Miles ever run and I just thought with the form he’s in (he could win).

“To come here and do it is a massive thrill.”

From the jump Allen worked to find the right part of the track and got a lovely smooth run in transit as one of the two Emma-Lee & David Browne-trained Kiwi raiders in the race, Rhinoceros, led the field around.

Begood Toya Mother settled second the outside of the front-runner, who looked to be over-racing a bit in the lead, while the other New Zealander Elephant was tracking third the fence.

Just Folk raced around fourth the outside of the short-priced favourite before getting closer heading into the turn for home at the 300m.

Elephant was gallant in defeat finishing off the trifecta in third as the beaten favourite off a far from ideal run coming to the end of his preparation.

All-in 2021 Kennedy Cantala odds are led by Just Folk’s conqueror in the Seymour Cup, Mr Brightside ($4.50), and are available in full here.