The Chris Waller-trained champion sprinter Nature Strip finally saluted in The Everest 2021 results at his third attempt holding off a fast-finishing Masked Crusader with Eduardo third in a thrilling edition of the world’s richest turf race. 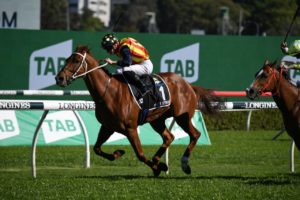 Nature Strip bravely held on to win The Everest 2021 at his third shot. Photo: Steve Hart.

In five editions of the now $15 million The Everest (1200m) at Royal Randwick, master horseman Waller has now won twice.

In 2019 he did it with three-year-old Yes Yes Yes and two years on he returned to the winners’ stall, this time with stable stalwart Nature Strip.

“I’m getting a bit emotional for a change. It’s just a great race. It’s captured the imagination of so many people, inside racing and out and what better way to get out of COVID,” Waller told the media post-win.

Fourth to his young stablemate in 2019 and then a disappointing seventh behind Classique Legend in last year’s The Everest results, Nature Strip was king of the mountain in 2021 so brave to hold on with a wall chasing him home the closing stages.

“We all are close. My team at home, not just with Nature Strip but with the whole team. Stewart, who rides him work and Gary who’s strapping him today because Stewart can’t be here. It’s a great story and that’s what our team’s about, work away and win some big races,” Waller said.

“He got the highest rating sprinter in the world for a reason and that gave me some confidence.

Third-up and fit the now seven-year-old son of Nicconi and former Australian Racehorse of the Year looked so relaxed in the mounting yard.

He and jockey James McDonald continued their outstanding partnership and saluted for the punters in front of a COVID-capacity crowd of 10,000 roaring fans.

Away well from the gates, McDonald allowed the favourite to roll out and take-up the lead with the Moir Stakes winner Wild Ruler surging up into second.

Around the turn Nature Strip led onto the straight and was there to run down with his stablemate, three-year-old Home Affairs on his inside before dropping out.

Flat out but still chasing was dual Group 1 winner and Nature Strip’s last start conqueror in the Group 2 The Shorts, the Joe Pride-trained Eduardo.

Inside the final furlong Nature Strip was out to a nearly two length lead, but the winning margin was quickly shortened by a fast finishing Masked Crusader.

Winner of the Group 2 Premiere Stakes last time out, the Hawkes Racing-trained Toronado gelding Masked Crusader came from nowhere making up all the ground in a nail-biting last-to-second effort.

He just ran out of room and was denied the $6.2 million first prize in The Everest crossing second by the barest of margins.

In third rounding out The Everest 2021 trifecta in terrific improvement from his 11th last year was a very brave Eduardo.

“A break for three weeks and then he goes to Melbourne for the Darley Sprint,” he said.

“(One of the owners) is here today but the rest haven’t been over here. We’ll take him down to Melbourne and hopefully the situation improves in Melbourne.”

Nature Strip is now into $3 in the all-in 2021 Darley Classic odds at Ladbrokes.com.au – available in full here – having wont he race in 2019 before a second last year.