A boilover win down the Flemington straight from the Godolphin-raced Kallos in the 2021 Danehill Stakes results has the young sprinter on track for a potential shot at the Group 1 Coolmore Stud Stakes (1200m) on VRC Derby Day this Melbourne Cup Carnival. 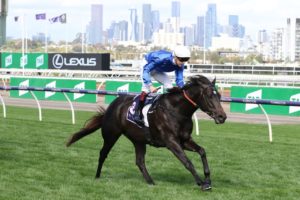 Kallos is onto the 2021 Coolmore Stud Stakes after an upset win in the Group 2 Danehill Stakes at Flemington. Photo: Ultimate Racing Photos.

All eyes were on the fellow Godolphin runner Ingratiating in this year’s Group 2 $300,000 Danehill Stakes (1100m), but it was the James Cummings-trained Medaglia D’Oro colt Kallos who stole the show at a price thanks to a lovely on-speed ride by up-and-coming hoop Fred Kersley.

Backing-up from an excellent Hawkesbury maiden win first-up from September 9, Kallos had his second run down the straight at HQ having finished a nice second in the Listed Festival Stakes (1000m) back in February as a juvenile.

He showed nice improvement in the Danehill Stakes, settled well second up on the speed following the leading horse Lloyd’s Crown around.

Inside the final furlong Kerlsey let down on the eventual winner, Kallos showing a terrific turn of foot to dart away for a big win over a brave General Beau who raced out further on the track about three out in fourth throughout.

Bruckner meanwhile held for third to round out the Danehill Stakes trifecta.

“We always had a bit of an opinion of him,” Godolphin representative Reg Fleming told Racing Victoria post-win.

“He run really good up the straight here (last campaign).

“James (Cummings) thought we’d bring him on and have a go at this.

“We’ll let the dust settle and see what.

“He could go that way now he’s won up the straight.”

All-in Coolmore Stud Stakes 2021 odds at Ladbrokes.com.au – available in full here – have Kallos been slashed from $34 into $8.