The Joe Pride-trained Eduardo ran the ideal trial ahead of the $15 million The Everest when running down the favourite Nature Strip in a gripping The Shorts 2021 showdown at Royal Randwick. 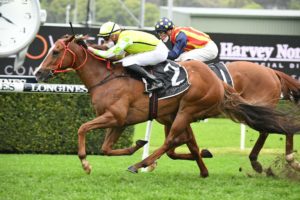 Eduardo was brilliant first-up winning The Shorts 2021 ahead of the $15 million The Everest. Photo: Steve Hart.

An evergreen eight-year-old, Host gelding Eduardo looked to be going his best yet returning right where he left off in winning form thanks to a brilliant ride by the flying Nash Rawiller in the Group 2 $500,000 The Shorts (1100m) on George Main Stakes Day.

Runner-up in last year’s The Shorts results, Eduardo went on to run a disappointing 11th to Classique Legend in the world’s richest turf race and will be after atonement in the 2021 The Everest on October 16.

Filling the slot for The Star & Arrowfield this year, the sprint star was outstanding in the autumn winning the Group 1 The Galaxy at Rosehill and the Group 1 Doomben 10,000 in Brisbane.

First-up in The Shorts and he was victorious again, having to fight off Chris Waller’s The Everest favourite Nature Strip to get first points ahead of their rematch in the big one next month.

Rawiller posted his fourth win of the day and rode Eduardo to perfection right from the jump with the horse brilliant early wide out, along with the resuming Rothfire first-up off a year-long break due to injury.

Eduardo led The Shorts field around with Nature Strip settled second, and the first two in running opened up a gap on the Rob Heathcote-trained Rothfire in third with Gytrash just off him in fourth.

Nature Strip and Eduardo locked horns around the turn, Waller’s last start Concorde Stakes winner getting to the inside and the duo going stride for stride onto the straight.

Jockey James McDonald tried to pull clear on Nature Strip and palm off Eduardo at the 300m, getting just in front before the eventual winner lifted on the outside and lay it down to the favourite to score the exciting upset.

Eduardo was able to wear down and run past Nature Strip who looked to have his measure, getting up over the top late for the all-important victory.

“I never thought I was a chance until the 100 (metres),” Rawiller told the media post victory.

“Great effort by Joe to get him there today. A bloody good training effort.

“The horse was just magnificent over the final 100 metres.

“He was very strong late.

“Better than ever. He’s a furnished product now. He’s the real deal.”

The hard luck story of the race was Gytrash, Gordon Richards’ The Everest third placegetter from last season getting caught up with nowhere to go in a crucial stage on the straight before rounding out The Shorts trifecta.

Also very good ahead of The Everest was now four-year-old Rothfire, winner of the Group 1 JJ Atkins over the mile as a two-year-old, who ran out of his skin off the big break on the soft track for fourth.

Updated all-in The Everest odds at Ladbrokes.com.au – available in full here – remain led by Nature Strip at $4.60, while Eduardo looks value at $6.