The Grahame Begg-trained Nonconformist is into the Group 1 $5 million Caulfield Cup (2400m) winning the ballot exemption via a narrow victory in Saturday’s 2021 Naturalism Stakes. 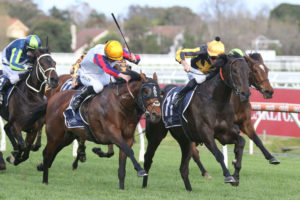 Lightly-raced for a five-year-old, Nonconformist had not won a race since the Group 3 Coongy Cup (2000m) at Caulfield in October last year, but was back to his best at the same track and distance on Saturday.

Improving on a lead-up fourth behind Superstorm when under a length beaten at The Valley second-up in the Group 2 Feehan Stakes over a mile, the galloper relished a rise in distance and a drop in weight for the Naturalism.

Childs had the eventual winner settled nicely between horses fourth then fifth in the run as No Effort led the field around.

No Effort was still in front at the 200m, but Childs was winding up on the favourite giving chase.

Also running on at the 100m and making a late lunge for the title was the Anthony & Sam Freedman-trained Delphi who dived right on the line.

Nonconformist was tough and just held on to win, while Symon Wilde’s smart Tavistock mare Tralee Rose off a far from perfect run getting caught up at a crucial stage ran a distant third.

It was a lovely winning ride from Childs who held the three-wide running line and he was rewarded as Nonconformist really dug in late after the exciting challenge by the imported runner-up.

Begg said it had taken patience and time to get Nonconformist to where he was in Group winning form today, and that they were hopeful he could perform well in tougher assignments to come like the Caulfield Cup on October 16.

“He was a dope,” Begg explained bluntly.

“It took him the first two or three preparations to work it out.

“Once he did, he showed a bit of x-factor.

“He’s been a good, handy horse. A good, solid horse for the stable.

“We’ve looked after him…hopefully he keeps on rewarding us.”

All-in 2021 Caulfield Cup odds at Ladbrokes.com.au on Nonconformist to be the next are into $15 and are available in full here.