The horse dubbed the ‘Beast of Britain’ once again proved his champion status with the William Haggas-trained raider Addeybb successfully defending his title in a thrilling 2021 Queen Elizabeth Stakes result over the very brave Verry Elleegant. 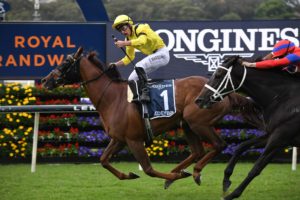 Addeybb was brilliant fighting off Verry Elleegant to defend his title in the 2021 Queen Elizabeth Stakes. Photo: Steve Hart.

Twelve months on from their quinella in the same event last autumn, Addeybb and Chris Waller’s brilliant mare Verry Elleegant fought it out in an outstanding edition of the Group 1 $4 million Longines Queen Elizabeth Stakes (2000m) at Royal Randwick.

Pivotal gelding Addeybb travelled to our shores last season and beat Verry Elleegant home in both the Ravnet Stakes and Queen Elizabeth Stakes, with the mare taking out the Tancred Stakes in between.

This year they renewed their rivalry in the Ranvet with Zed five-year-old Verry Elleegant posting her eighth Group 1 success when turning the tables on the UK raider.

She was favourite to do so again in the Queen Elizabeth on Day 2 of ‘The Championships’, but things did not play out as expected.

When predicted front-runner Addeybb was slow out the gates and forced to sit back wide the early stages, it was up Adelaide galloper Dalasan on the quick back-up off a Doncaster Mile third last weekend to set the pace in the weight-for-age classic.

With Dalasan in the lead and Addeybb towards the tail, Verry Elleegant was also giving her hoop James McDonald a tough time throwing her head around, over-racing and refusing to settle.

English hoop Tom Marquand quickly moved up on her outside inching closer and went into a clear second, while Verry Elleegant got shuffled back to sit second last ahead of this year’s Tancred winner Sir Dragonet.

At the 600m McDonald peeled out and started his run in what turned out to be a race for the ages.

Once on the straight, Addeybb got going and Verry Elleegant rolled up on his outside as the two best horses in the race fought it out to the line.

Marquand was going full bore on the reigning champion, while after circling the field Verry Elleegant was trying her hardest to get past him.

The English superstar lifted however, showing tremendous grit to fend her off and go back-to-back with a three-quarter length win in a repeat of last year’s result.

Holding on for another feature race third in a huge effort was the front-running Dalasan for Leon MacDonald and Andrew Gluyas at big odds.

For Marquand it was a remarkable result as he was able to return to scale after winning a Group 1 race – his fourth in 12 months – in front of a crowd for the first time with COVID-19 restrictions having seen his previous three take place to empty grandstands.